10/31/18 – It was a few weeks ago when I was contacted by our friend, Shelley Emerson. She had been contacted about a small kitty hanging outside of a local animal shelter. Unfortunately, as a municipal shelter, this little one wasn’t taken in because he appeared to be blind. Shelley contacted me to see if we would back medically, then she called our other friend to see if she would take him in if she was able to capture him. Well, all of that was done and Stevie (aka Oliver) was taken to the vet where he was examined, vaccinated, tested, and neutered. It could not be determined if Stevie was totally blind and we decided to have our Stevie seen by one of our favorite doctors, Dr. Natalie Zalac. who now has her own practice, Orion Animal Hospital. Dr. Z found that Stevie is totally blind which was probably the result of an earlier disease never treated. Because his eyes were partially open, they would be susceptible to infection and would need to be cleaned and treated with ointment three times a day. Dr. Z. believed that Stevie would be much more comfortable without his eyes, which were gradually shrinking. Also, we all felt it might be easier to find him a forever home if the adopter didn’t have to worry about cleaning his eyes multiple times a day. And, we thought it would be easier for Stevie if he didn’t have to poked and prodded three times a day and take a chance on further issues.
Stevie had both eyes removed yesterday and was picked up this morning. He is doing great. He is very lovable and knows how to use his litter box. We would love to see him get a nice, quiet, loving home. Anyone interested in Stevie should contact his foster mom, Debra at: debraberolotti28@gmail.com – diana
4paws1heart.org/donations/ 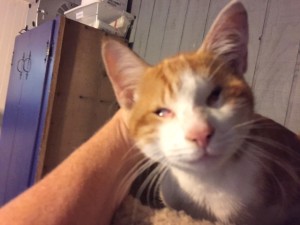 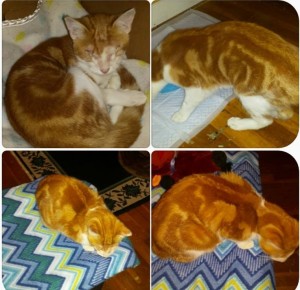