1/21/20 – Dahlia was pulled from a municipal shelter by a friend of 4p1h who we’ve worked with for a long time. She was very underweight. At first it was thought that she had ‘happy tail syndrome’. This occurs when a strong tail repeatedly hits solid objects with force during a wagging session, resulting in the thin skin of the tail splitting open. Dahlia was treated as directed but that didn’t work. She ended up chewing the end of her tail off. The rescuer then took her to two other doctors and it was finally determined that the tail was actually broken in 3 places. Dahlia was returned to her foster to heal and was later spayed. It took an extra long time to heal. Then Dahlia went to live with her rescuer. It was learned over the course of time that she was a ‘basement’ dog and had no real house manners. She is still learning. She is clumsy and has no boundaries. Her ears get infected often and she has a food allergy. Not many people want a dog with so many issues going on so she’s remained with the rescuer in hopes a forever home will some day be found.
A couple of weeks ago when she was getting her toenails cut, it was noticed that Dahlia seemed to be drooling a lot. It turned out that a canine tooth was bleeding. We were contacted and an appointment was made to have Dahlia see Dr. Zalac. Dr Z found 3 broken canines. Dahlia had surgery and is now doing well. Dahlia is in good hands. – diana
4paws1heart.org/donations/
P.O. Box 84, St. Clair Shores, MI 48080 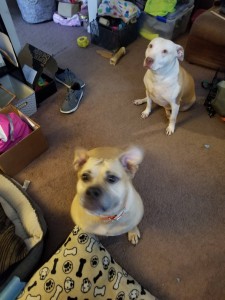 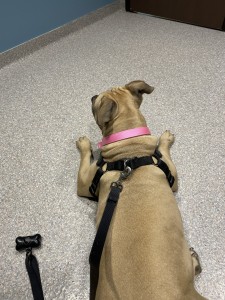