8/15/20 – Can you believe that on Tuesday, August 18, 4 Paws 1 Heart will be celebrating our 10th anniversary!! I swear it only seems like yesterday when Gina DeLuca came into our lives because she was the vet tech at a veterinary hospital we had decided to use for our very sick kitty. At the time, the vet hospital had a small kitten rescue which Gina took care of. The relationship with Gina became a little stronger when she took in a hours-old kitten who had been left at our doorstep by an outside cat who had 4 kittens that morning. Gina named that kitten ‘Mouse’ and Mouse became her constant companion for a number of weeks.
Unfortunately, Mouse did not survive but her mom became our cat, Sophia, one of her babies moved in with my mom and dad, and her other two babies found homes

Tony, my husband, and I remembered Gina and her kitten rescue and when we had some extra money from a family fundraising event, we decided to donate it to Gina. But when we contacted her, we found out that she had moved on to another job at an emergency hospital in Harper Woods, MI.

Gina told me about her experiences there and that was the beginning of our discussions as to how we could make a difference for those stray animals being brought into the emergency hospital. The majority of those animals were injured or ill and had no one to care for them, let alone pay for the medical treatment. Gina and I did some research and learned that there was no organization in our region who was committed to funding medical treatment for stray animals. At that point, I was able to convince a few of my colleagues from Leadership Macomb to join us in our mission and the rest is history.

We applied and joyously received our 501c3 – non-profit status and since that very beginning, we have paid $926,961 in medical bills for over 7,000 stray, abandoned, and abused animals. We continue to be humbled by the amazing support we have received from our communities, our donors, and so many veterinary hospitals. There are many cases that stand out for me but I think that two of the most prominent, which brought attention to our organization, involved Hercules and Katniss. Their stories were so heartbreaking that they brought awareness of the cruelty of some humans and the plight of those most vulnerable in our society. Hercules’ back legs were broken by his owner and Katniss was left out in the rain, at the street curb, with the garbage.

Please check out our website, or are main fb page to read the many cases we have been involved with since 2010. 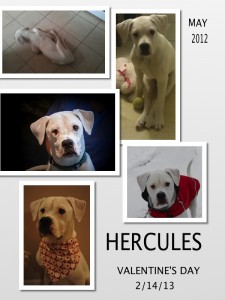 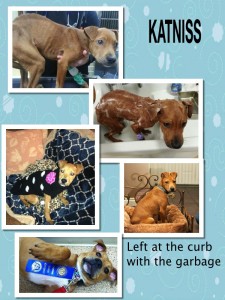 Again, thank you for your long-time support. Please know that you have made a significant difference in many lives. – diana
4paws1heart.org/donations/