8/21/20 – For every disheartening story, there are many more happy beginnings. Here is one of them as told by Oreo’s family:

Hi 4Paws This is Oreo, adopted in 2013. Reported to me that he was run over by a car in Detroit, rescued, rehabbed and we adopted him. After adoption, he broke his leg jumping off furniture in our home and after a visit to the vet and a bone scan (and a cast) we were told that he suffered from many years of malnutrition causing brittle bones and the broken leg. Poor guy. He is all fixed up, eats like a champ, and has two cats and a dog (as well as humans) who love him. He’s the cuddler in the group and cuddles with any human or animal available- any time of day ❤️. We love Oreo Doreo. Thank you 4 Paws. 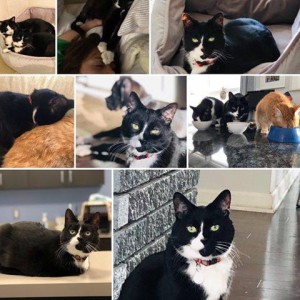