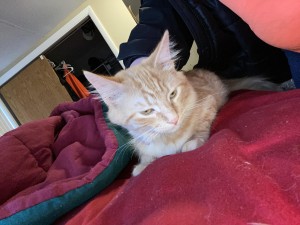 I received this e mail from a person who moved to the Mt. Pleasant area and over the past couple of years we have helped with the many cats who have showed up on her property:
“This one I’ve been calling Garfield and I do plan on keeping him, he’s fought too hard to make it. My grandparents heard a cry from under their deck at the end of September. My grandpa tore his deck apart and this little guy was under it, starving and sickly. instantly I took him into the vet as he couldn’t stop sneezing and shaking his head. He ended up having upper respiratory problems from being thrown out to fend for himself so young and he had an ear infection. We did drops and an immune boost for him and he’s gotten somewhat better. He’s not fixed yet though. I did get his rabies shot though so he could get fixed once he turned 6 months. (The vet said they like to wait till this age and they (were/are) booked out for surgery appointments. Can you help? Kayla”
Of course we covered Garfield’s medical bills and he is doing well. – diana
4paws1heart.org/donations/
Share