Skip to primary content
3/11/21 – No one knows what happened to poor Howie. Three days ago he was fine when he showed up for food but then Tuesday night he showed up “shredded”. The caretaker feeds several cats,skunks, possums, and raccoons but it is unknown who attacked this poor cat. The caretaker contacted the rescue, Saving Cats and Kittens Michigan. The rescue took the cat and contacted us to see if we could help. It was critical that Howie be seen asap as his wounds were already smelling of dying flesh and infection.
Howie saw a veterinarian late yesterday afternoon and had to be sedated; it was obvious that he was in significant pain. The doctor reported that Howie was badly torn up. His face was swollen and huge, gaping, bloody ripped flesh was all over his head and leg. He received an injection for pain and one for infection. Thankfully, he tested negative for fiv/felv. The rescue brought him home and, at the advice of the doctor, kept him crated to limit his movement. Last night he only ate a small bite but it appeared that he was still in so much pain from the huge holes in his head that he was ‘giving up’. Please pray for Howie. His foster is giving him a lot of attention and love. Pray that Howie recovers and that he may be able to become an ‘inside’ cat who will get lots of love and safety for the rest of his life. – diana
4paws1heart.org/donations/
Your donations Save Lives! 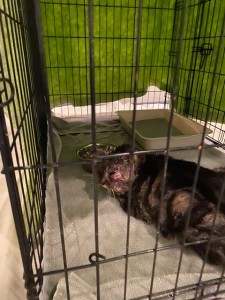 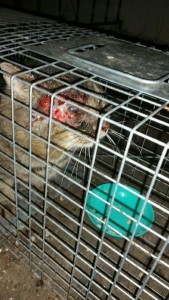