Skip to primary content
2/3/21 – I received a request to assist two cats living under a home. The homeowner has been feeding them and she thinks they may be siblings. Both cats allow her to pick them up and give them love but she can’t bring them into her home because she has two dogs and two cats. When she went to feed them the other day, she noticed that the female appeared to have a prolapsed rectum so she contacted us for help. The beautiful, black female, Lynette, had a tipped ear so at one time someone took her in to be spayed and released her to the outside although she is very friendly. I offered to also help Lynette’s brother, Sir Flufferton, because he had not been neutered. Yesterday, they both saw one of our favorite veterinarians. Lynette did not have a prolapsed rectum (yeah!) but the doctor thinks she had been struggling due to constipation so that was taken care of. They both tested negative for FIV/FeLv and Sir Flufferton is scheduled to be neutered. Unfortunately, because there was no room in the home, they were both released to the outdoors but if anyone is interested in adopting this very bonded pair, contact Leah Lindsey at: tremontismama@gmail.com or message her on FB. – Diana
4paws1heart.org/donations/ 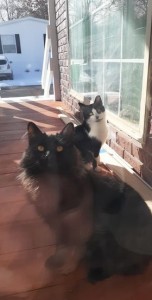