We had been following the story of the Mom and her 6 babies rescued by our friends at Providing For Paws and knew we had to figure out a way to help. Unfortunately, the tail was not as happy as was thought when everyone was rescued; one puppy died early and two of the puppies have since died from Parvo and although a third is back home, she is still struggling. We will continue to look for ways to help our rescue partners by conducting fundraisers and encouraging support from our many friends and family. Here is the story: ~ diana 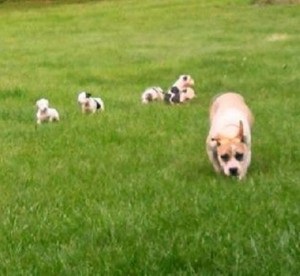 “Happy Tails for This Mama & Pups (9 photos)
Thanks to some folks that should have angels wings attached to them, this story has a happy ending. While in the vets office with PFP’s Grace, going over Grace’s surgery with the vet, we were told about an encouraging story of survival from one Mama that wasn’t expected to live after being found to have Pyometra. The vet told us this story because we were so worried about Grace not surviving surgery for her Pyometra, because she was so emaciated. The vet explained that after seeing this Momma make it through what she did, he will never doubt how strong our Pibbles are again. Momma was found six weeks ago by a family that lives in Westland. Not your typical home with houses on top of one another, they have lots of land that is a very wooded area. When this family mows their cleared portion of the lot, they then put their clippings into a compost in the wooded area. It was the family’s 20 year old daughter who was mowing on this day, six weeks ago, dumping the clippings back into the wooded area, when she spotted a small white object moving in the woods. Not knowing what this could be, she went out into the wooded area to find out what in the world this could be. To her surprise, it was a tiny little new born puppy. Not knowing where in the world this puppy came from, she looked even further into the woods and came upon a very emaciated Momma, who was laying on the ground covered in nothing but flies and maggots! Momma was licking the maggots and flies off of her so that her poor little new born pups could eat. The young lady then called her parents and told them to get over there immediately to see what she had found. Six pups and this poor Mama who was to weak to move and full of flies and maggots. The family got everyone gathered up and rushed to Nicolas vet clinic, where they began to wash everyone up and did testing on Momma. It was found that not only was Momma emaciated, she was suffering from Pyometra as well as being heartworm positive. Surgery had to be performed immediately to save Momma’s life from her uterine infection, and the family would now have to bottle feed the six babies. Shortly after getting to the vet clinic, one of the six pups had passed away and the vet was very worried that Mama would not make it through the surgery. Momma was now vomiting up black stuff with nothing but maggots and larva in it. They did the surgery praying for the best outcome or Momma would die a longer suffering death. Once on the table opened up, a massive amount of maggots were inside of Momma, which was now yet another obstetrical for her to get past. Despite all of this, and thousands of dollars later, Momma and all five of her pups have lived. It was touch and go for weeks as to any of them making it through this. The all working family was taking shifts to bottle feed the pups and help get Momma back to health. However, because the round the clock nursing from this wonderful family, all these fur kids have made it through. The family has decided that Momma is going to stay with them. Humans have done her wrong in the past and she is scared of every little new thing that comes her way. She loves her new family and they cannot do without her. PFP has offered to help with adopting out the pups and finding perfect bully adopters for them. Not to mention trying to help save even more expense with the pups who are now all ready for their vaccines as well as spay and neuters. We did not want this family to pay anymore then they already had to already to care for all of them, especially the cost of Momma. Happy Tails for this beautiful pibble family, thanks to some very kind citizens who did this all without any help from rescue. Momma is sure one lucky girl to be alive today, as well as those pups. Angels must have been watching over all of them that day.” ~ Providing For Paws