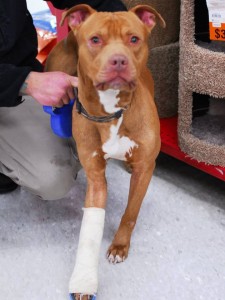 When we read Soldier’s story, we had to offer help in the form of aqua therapy with Lori Jobak of 4Paws Health & Wellness. Lori did evaluate Soldier and believed it would be worthwhile to work with Soldier to see if amputation of his leg could be avoided. Unfortunately, his foster family had a new baby and could no longer commit to Soldier, let alone therapy sessions. 4 Paws 1 Heart would love to follow through on paying for his first round of therapy sessions but Soldier needs a new foster who can commit to taking him to the sessions. Please help Home Fur-Ever and Soldier find that foster. Here’s contact information and Soldier’s story. ~ diana

“Soldier is in need of a new foster home that can take him to his physical therapy appointments. He’s a little reserved at first, but is such a doll. 313.645.4399 [email protected] orhttp://clicktohelphomefurever.com/Foster_.html

Soldier *Will not need to attend events for several weeks, but will need to make PT appointments*

I am already neutered, housetrained, up to date with shots, and good with dogs.

January, 2014: Last night a couple of HFE volunteers responded to an Urgent post about an injured dog seeking refuge in a backyard of a homeowner in Detroit who reached out for help. With the horrible weather they couldn’t bare the thought of this dog being out there left to suffer in pain and freeze. He has been named Solder and was taken to the vet for medical evaluation last night. He has nerve damage and if the feeling doesn’t return, his leg will have to be amputated. We are asking everybody to share this, as we are searching for another rescue or someone that can help him by fostering him and caring for him while he heals. It would not be fair to evaluate this dogs temperament right now as he was just saved from the freezing cold and is suffering from an injury, so we can not give a true assessment of his temperament, however, he did seem to really take to the homeowner and was fine with the volunteers that transported him. Unsure how he is with other dogs.” ~ Home Fur-Ever 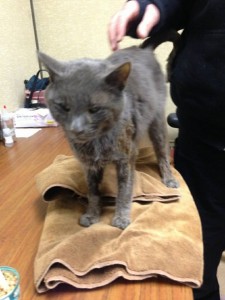 2/26/14 – Although we have the potential for two major surgeries coming up, we had to help our good friends at The Devoted Barn and, now, Tigerlily Cat Rescue. We have sent medical dollars to help little Hemi. For future updates follow Hemi on the Tigerlilly Cat Rescue facebook page. Here is his story ~ diana

“We wanted to take a moment to introduce you to our sweet boy Hemi … Hemi came to us emaciated, dehydrated, suffering from an upper respiratory infection, and with burns from crawling into cars’ engine compartments to stay warm. All this, and he is still the sweetest, most appreciative, and loving fella! He is eating and drinking quite well, and on antibiotics. He did get some fluids as well, but is now holding his own and not clinically dehydrated. The vet feels he has a good long term prognosis!” ~ Tigerlily Cat Rescue

2/25/14 – 4 Paws 1 Heart very much appreciates the overwhelming efforts made by our rescue friends. Karl and Molly are with The Devoted Barn and we are thankful that we are able to send them some medical dollars. Here is their story. Please follow them on The Devoted Barn facebook page: 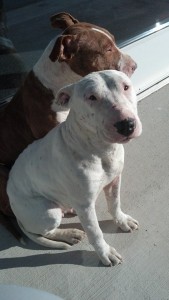 “These two beat up, bonded pups found their way to Matick Chevy early this morning looking for help. They were in luck as our awesome Anna works there. Our friend Jamie ran over and picked them up and they are now headed to our vet. They are in bad shape, The brown boy we’ve named Karl has a tumor on his back and the female we’ve named Molly has wounds all over her face. “ 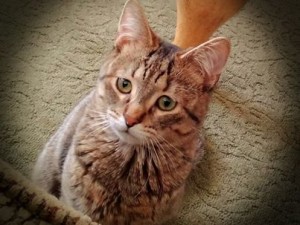 Our Dewey!!! Less than 2 lbs., he was found under a van cold and starving with lacerations, fleas and in overall very tough shape. Look at our baby today. Thank You Cory Lynn for making our baby your baby! ~ diana

Look how big our little miracle is getting 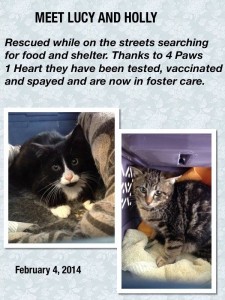 2/4/14 – Meet Holly and Lucy. We are very happy to have two less stray females on the street capable of reproducing. Wish them luck in getting their forever homes. 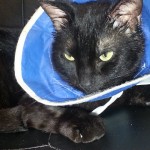 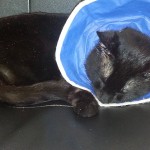 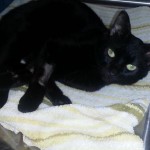 2/7/14 – Update on Cole. This under 2 year old male kitty has been through more than enough in his short little life but his strength and sweetness goes beyond words. Cole recently underwent a major operation because he was having trouble urinating on his own. The decision was made after several attempts to treat urinary tract infections and unblock his urethra. Cole was also treated for an ear infection, intestinal parasites, and fleas. He has been feline leukemia tested negative, vaccinated, dewormed, and neutered. The amazing Dr. Pillsbury and Animal Urgent Care doctors and staff have all been so good to this little lover who has been hospitalized for 4 weeks now.. 4p1h wanted to give Cole a 2nd chance but we could not do it without your help. Please share his story and let’s try to find him his forever home. He is such a fighter and now he will be such a loving family member. If anyone is interested in giving Cole a forever home, please contact us at [email protected] 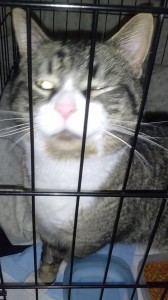 2/6/14 – Meet Jack: He was looking for warmth under the hood of a car and was seriously injured by a fan blade. Thankfully, a good Samaritan found him and contacted our friend Jo A. who contacted us. Our good friends at Patterson Veterinary Hospital made room in their schedule to see him and although he had a serious gash in his body, he is doing great tonight. His foster says he is the sweetest and has already fallen in love. We’ll update everyone on his status. ~ diana 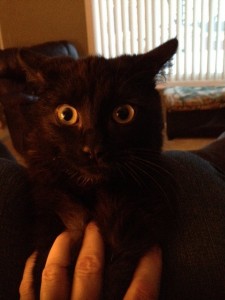 2/5/14 – This little sweetheart was being kept warm by the heat coming out of the dryer vent. The homeowner, with the help of our friend Jo A., caught the little guy and 4 Paws 1 Heart paid for neutering, vaccinating, and testing. He is very health and now in foster care. Many thanks to those who care. Please consider donating to 4 Paws 1 Heart so that we can continue to help. ~ diana

CATS CONTINUE TO BE KILLED IN EASTPOINTE, STERLING HEIGHTS, WARREN, AND ROSEVILLE TO SPITE THE PEOPLE WHO SUPPORT TNR: Please go to the link provided and read Eastpointe City Manager’s statement.

Mr. Duchane accuses the cities who have agreed to work with the County Shelter (that would be St. Clair Shores) as WEAK — No, Mr. Duchane, St. Clair Shores is NOT weak — The leaders of St. Clair Shores decided they could save taxpayer dollars by NOT paying for cats to be euthanized. The Strong City of St. Clair Shores recognizes the important role that animals play in the environment and in people’s lives. AND, Mr. Duchane, to think that your Animal Control Officers can identify who is a scared cat or a feral cat is ridiculous and to believe you will find rescues, who are already overwhelmed with cats because you won’t support a FREE program to spay and neuter, is foolish and unrealistic. And, Mr. Duchane, no where in your very ‘informative’ statement do you address the cost of killing the cats who will be considered feral — smokescreen, Mr. Duchane? I think so because you don’t want your residents to know that what you (and the other 3 cities) are doing is supporting the death march of innocent animals.

I don’t think any of the cities in this murderous coalition cared so much about saving money as much as they cared about not working with the County Shelter and those organizations working with the shelter. Unfortunately, they could not look beyond the ‘threats’ to do what was right for the animals and the community. Do I like to see stray animals outside? No, but I can no longer stand the thought of letting our cat population continue to grow without trying something different from killing and that is spaying and neutering. The rate of killing cannot keep up with the birthrate of cats or there wouldn’t be 18,000 cats roaming Detroit or who knows how many in the cities identified.

One last comment to these cities of Warren, Eastpointe, Sterling Heights, and Roseville–let me know how your rat problem is once this winter is over. And, by the way, I hope your residents don’t have too many of their dogs die of Lepto which is spread through rat urine. http://www.cityofeastpointe.net/index.asp?SEC=D255B2D9-B604-4C9F-8FFE-A391C0B88429&Type=B_PR

I can’t tell you how many cats we have helped in the past 10 days who have been rescued by individuals who have become 4 Paws 1 Heart friends. In making arrangements for the veterinary visits and writing the checks, I haven’t had a chance to put out the stories — but I will! In the meantime, our Pirate for Paws event is official. Here’s the flyer. Please be there and please share. 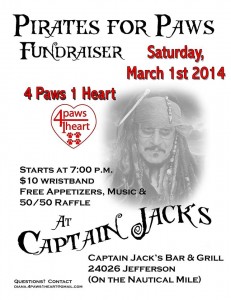