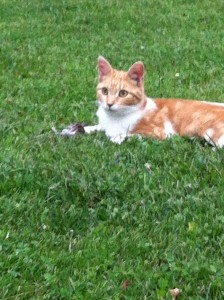 “Hi my name is Jennie. I was told to contact you and see if you can help me in any way. About a month or so ago I was surprised to see a cat show up in my garage. A very skinny and sick orange and white cat. I am guessing her age is 7-8 months but I could be wrong. She was very scared of people so I thought she was a wild kitty. Well I was wrong. It only took 2 days and she was the most loving kitty. And her and my puppy were best friends instantly. I believe somebody had just dropped her off. I started feeding her and was hoping she would get better but she is not. I am pretty sure she has a upper respiratory infection. I can’t take her to the vet due to my husband being laid off for so long. And I am scared to bring her in not knowing exactly what is wrong and don’t want my 2 inside cats to catch it. I feel so bad for her. I cry and feel so guilty because she is such a good girl and asks to come in an I can’t. I am scared one morning I am going to go outside and she is going to have passed away. I have talked to many vets and nobody is willing to work with me. And I have tried asking other groups but again they all say they are to full or they dont have the funding. So I am hoping you can help or know another group that might. Thank you so much.” ~ Jenny S,

Well, once again, I could not say no.  I felt bad for not only the sweet cat who was suffering but for Jenny because she obviously wanted to help but couldn’t afford it.  The first challenge was finding a vet who would work with us and trust that I would pay the bill if they would see the cat (now named Dusty) now.  As Jenny said, many would not BUT we found some wonderful people at the Animal Health Associates Hospital in Mt. Pleasant who was willing to work with us.  Dusty was given an appointment, treated for an upper respiratory infection, tested, and, low and behold, she was found to be pregnant.  Of course this meant her treatment had to be adjusted accordingly.  After a few days on the medication, Dusty still continued to have labored breathing so she was brought back in by Jenny – even though the hospital is a good 45 minutes from her home and money for gas was very limited.

Dusty has been doing well and is being watched closely by Jenny and her family.  We will keep everyone updated when she has her family. If you are in the Mt. Pleasant, Michigan area, please consider the Animal Health Associates for your veterinary needs.~ diana 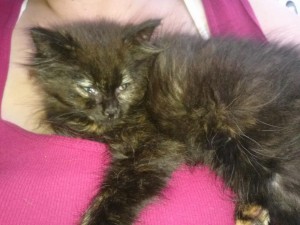 I received a call from Sharon P. about a kitten who showed up where she was vacationing.  The eyes were nearly shut and she was having difficulty breathing. Unfortunately, 4 Paws 1 Heart does not have any veterinary connections in the area the baby was found but we still jumped into action just in time.  This sweetheart is now back in Southeast Michigan and has been seen by one of our favorite veterinaries, Healthy Paws.  She is doing well and will be going to a rescue soon. ~ diana 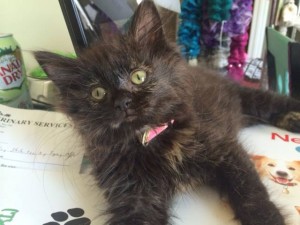 Thank you for assisting with the medical funding for this sweet girl. She is doing amazing and now in the care of Claws and Paws Rescue (West Branch).

8/5/14 – Prayers Needed for this Sweet Girl – Her name is Coco and she was found on the street, emaciated and seriously ill from Parvo. She is with a very small rescue named Friends of Scooby. 4 Paws 1 Heart is always happy to help individual rescuers and those rescues who haven’t the resources to take on serious cases. Wishing Coco a lifetime of hugs and kisses. ~ diana

8/10/14 Update – After being transferred to another doctor, Coco has for the first time in a while, ate — not a lot but it is a good sign.  Please continue your positive energy and prayers and follow her on the Friends of Scooby Animal Rescue page. ~ diana 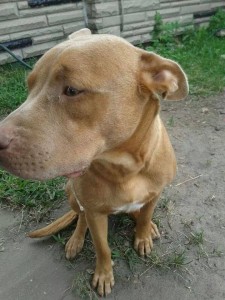 Share
Too cute for words – our Storm babies. ~ diana 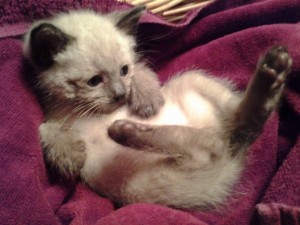 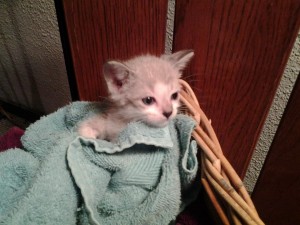 “Arthur & Gordo are on their way to be united with their families! Be good boys, I love you!” ~ Debra
Share

8/3/14 – Meet Sweet Daisy: She is a 5 year old Chihuahua who was attacked by another dog. Her owner brought her into the Advance Animal Emergency (AAE ) to be euthanized but the staff fell in love with her. The owner signed her over and the new partnership fund we created with the great doctors of AAE paid for her medical treatment which included eye surgery and repairs for many of her lacerations. She is now in a loving foster home but seems to be suffering from Post Traumatic Stress Disorder. She often wakes up screaming seeming to be reliving the attack. She will need a forever home but not just right now. Thank you to the great staff of AAE and Dr. Lutz for loving this sweetheart. 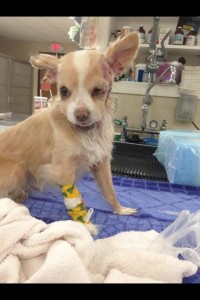 Share
More Advocacy opportunities on this cloudy day. Breed Specific Legislation is real in many communities and it has forced many pets to be removed from homes. Even though the breeds being discriminated against have proven themselves to be great family pets (yes, it is all about the owners), communities are still trying to enact laws which disallow ownership of certain breeds. BSL can happen in your community if you don’t take action now. Please share and make a difference by writing your State legislators. ~ diana
Do you know someone who has been the victim of BSL (breed specific legislation)? If so, we NEED them! Please message us or post here if you can help us find folks who have lost their dog or who have had to fight to keep their dog due to breed discrimination where they live.Definition of BSL: Breed discrimination or breed-specific legislation (BSL) is a law that bans OR restricts certain types of dogs based on their appearance. BSL applies only to dogs of a certain appearance, not to any and all dogs. It does not take into account how the owner has raised, trained or managed the dog. It does not take into account the dog’s actual behavior.
Share
We often say that everyone can make a difference. Whether you adopt, foster, donate time/money, or just advocate. Now is your opportunity to advocate and let the government bureaucracies know how you feel about their wanton promotion of cat slaughtering. It continues to amaze me that even with 96.5* million cats living in homes today, our local, State, and federal governments continue to treat the feline no better than a rat. Please contact your representatives and let them know that the killing has to stop. Thanks! ~ diana
ACTION NEEDED: the U.S. Fish & Wildlife Service (USFWS) is waging war on community cats. USFWS staff submitted a letter, on official letterhead, to policymakers claiming that the “agency strongly opposes free-roaming, domestic or feral cats” and trap/neuter/return (TNR) programs. The letter also threatened possible legal action if a specific county in Florida does not “eliminate free-ranging feral cats.” This is not an isolated incident. USFWS has repeatedly covertly promoted the killing of cats, while insisting publicly that the agency has no official position on the issue. And, Michigan could be their next target.

The promotion of an unsanctioned policy is a violation of the public’s trust. Any official policy requires legal notice informing the public that the policy is being proposed and inviting public input, commentary and discussion — a process essential to democratic government. Unless and until the agency actually adopts an official policy, USFWS should not be injecting itself into local affairs to advocate for lethal roundups.

Your U.S. House Representative:
Find your representative by entering your zip code at this site:http://www.house.gov/

Tell them that “as an American and a taxpayer, I am concerned about how government agencies craft, promulgate and enforce policies regarding the management of animals. As such, it is alarming to hear that the U.S. Fish & Wildlife Service (USFWS) is once again covertly promoting unauthorized policies and making recommendations that support the elimination of free-roaming cats.

The promotion of an unsanctioned policy by government agency personnel is a blatant violation of the public’s trust. Unfortunately, this type of political posturing seems to be quite common, as USFWS personnel have repeatedly promoted the killing of cats, while publicly asserting that the agency has no official position on the issue.

To date, no official “feral cat” policy has been promulgated by the agency. The public has not been given adequate legal notice, nor has the public ever been invited to submit any input, commentary or discussion — a process essential to democratic government. Yet, entrusted USFWS personnel continue to abuse their authority by covertly issuing recommendations for lethal roundups and communications containing veiled threats of possible legal action for any humane efforts that may be implemented by local governments.

Unless and until the agency makes an official policy, the agency has no business injecting itself into local affairs to advocate a policy of lethal consequence.

I urge you to demand that the Government Accountability Office audit the USFWS and force agency personnel to stop misrepresenting USFWS’s official position immediately. This abuse of agency discretion not only endangers the lives of domestic cats, it also erodes the public’s trust in the very agencies we expect to serve our interests.”

Share
8/2/14 – Check out Ms. Charlotte’s TV debut on the St. Clair Shores Local Matters cable show. She first appears with our Animal Care and Welfare committee member, Liz Nicosia at the 4 minutes and 31 seconds mark. And once again in the ‘Around the Town’ segment at 16:25 minutes. ~ dianahttp://www.scsmi.org/MediaCenter.aspx?VID=SCS-Local-Matters-231
Share

8/2/14 – Fred Update — Remember this little guy? His mom went into a nursing home and he was so stressed out and lonely he was licking his fur off of his back legs? Well thanks to networking on our page, Fred found a forever home where he is doing really well, and he is most certainly loved. Thank you all for your support and continued sharing! You just never know what a difference it makes.. We see these miracles happen so often just from networking. ~ Gina 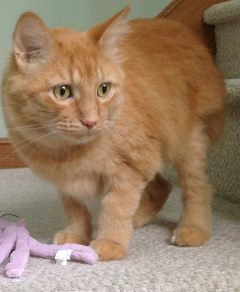 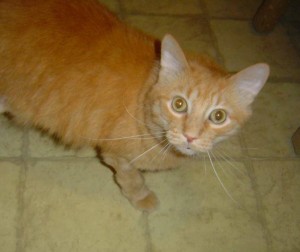 8/2/14 Lol… 4paws1heart “Dora” has some crazy eyes here, but we wanted you to know she is doing great even though she lost her baby.  We have her on antibiotics with her wonderful foster mom Kelly. She might need surgery on her mammary mass, but we won’t know for a couple weeks….we will be there for her if surgery is required.~ Gina 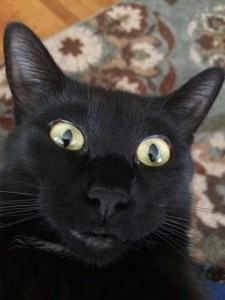