9/4/15 – Even with the greatest diligence, your re-homed pet could be in danger. A few days ago we received a frantic call from Samantha’s former mom. The former family had already spent almost $700 to take care of Samantha’s injuries but she still needed help with what appeared to be a dislocated jaw. The poor baby couldn’t eat solids and a tooth was sticking out. Thank you to the Warren citizen who didn’t turn her back. And thanks for the fact that Samantha was microchipped and was able to return to someone who would take care of her. We decided to help this baby after being assured that Angela and her family would be keeping her forever. Here is the story as written by the former (and now current) mom. The photo is from when Samantha was first adopted out and how she was found by the good Samaritan. Any time you question why good rescues are so ‘picky’, this is why. ~ diana

“During my pregnancy I became crazy allergic to Samantha, hives and everything. We had two cats and began searching to rehome. One kitty went with a friend, she is doing wonderful! Samantha was tougher to place. We tried all our friends and relatives, and ended up joining an animal re homing group on Facebook. A young lady was interested in Samantha. She was a mommy of one kitty already, and wanted another for her to be buddies with. We chatted for a couple of weeks, I wanted to make sure she was going to be well taken care of. She assured me she would. We met with the cats and I met her. She seemed super nice. The cats were a little apprehensive of each other, so we decided to do a trial period of 3 weeks and see how it went. If after the 3 weeks, she didn’t want her, we would take her back. We touched base after the three weeks and the cats weren’t best buddies yet, but she wanted to keep her and continue getting them used to each other and re- acclimated. That was my last contact with her.

Apparently, after about 4 months the cats still were not getting along so she gave Samantha to a friend who wanted her. She said that the friend was spoiling her and taking great care of her. The friend had her for about 6 months, at which time the friend and her boyfriend were looking for a new place to live, so they needed someone to cat sit while they moved. It was during this time, when Samantha was being cat sit, that she either escaped or was put out. I haven’t got into contact with the cat sitter, so I don’t know how she got out. The friend was apparently never notified that Sammie was missing. She was on the street for at least 3-4 weeks.
A good citizen in Warren found her hanging around her backyard and noticed that her paw was through her collar. She got her and took her to the vet. The vet scanned her for a chip and we were the number listed. None of the owners after us updated the information, so that’s how she landed back with us.
I think you know the rest from there. We got her arm repaired first and ran out of money. That’s when you amazing people came on board to help with the second portion. ~ Angela” 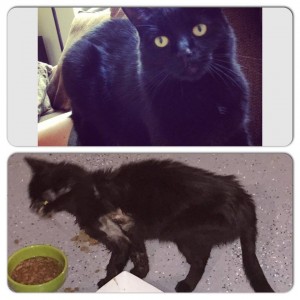