11/8/15 – RIP Sweet Romeo the II. A couple of days ago I received the following from a caring individual:

” I live in a Condo in Shelby Twp. and been feeding a poor stray cat for about 3 years now. Yesterday I was able to get close and pet him. (But I also received a letter from the Condo association telling me to stop feeding him or I will be fined. ) I cannot bare to watch a poor cat starve to death.. I am going to try to catch him and take him. He is a beautiful White cat with some spots…I have two cats inside and I would take him in but afraid my cats will get a disease from him. I want to help this guy survive
and maybe be adopted by someone.”

We agreed to have Romeo II seen by the veterinary but it was bad news. The poor little guy was already in the throes of full blown Leukemia and had been wasting away. It was decided to humanely euthanasia him. I truly thank God for our generous supporters who give us the ability to help animals like Romeo II so they will not suffer and die alone on the street. ~ diana 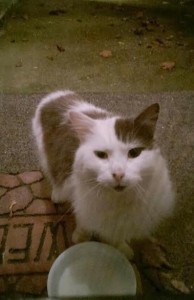