11/27/15 – Starting the holiday season with another happy beginning. The story of Sonic – now known as Dino. Here he is when he was first brought into the emergency and as he is today wishing everyone a Happy Thanksgiving with his very loving mom, Liz. Just in case you are new to Dino’s (aka Sonic) story, here it is. ~ diana

It was 9/30/14, shortly after he was brought into the emergency after being attacked by a large breed terrier that Gina reported this update: “Last night this 12 week old kitten underwent major surgery to repair the holes in his body wall. He also needed a feeding tube placed because of the damage to the roof of his mouth. Today, he is recovering better than we expected, but it could take several weeks before his mouth heals. Sonic not only survived a dog attack but he survived the surgery which was a risk, for a 3# young kitten. He is full of kisses, purring, and so full of appreciation today.” It was a couple of months later when Sonic was adopted by dear friends of ours but again he needed surgery for teeth damaged during the attack. He came out of the surgery like the champ he is. ~ diana 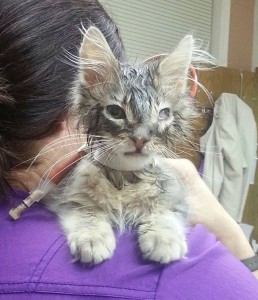 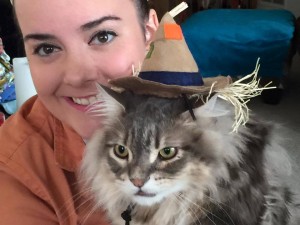