11/18/16 UPDATE: I am thrilled to report that we have found a benefactor to take care of Harley’s future medical bills.

11/17/16 – Please help if you can! Harley has been passed around — abused, abandoned, and neglected. We paid a little over $1,000 in June to give Harley a second chance but now I find out that there are still medical issues.

It was the end of June when we were contacted about Harley. A very sweet dog who had been obviously abandoned by her owner and left to fend for herself. Her collar was a wide belt which was imbedded into her skin. She was dirty and flea infested and had some issue with her eye. Harley showed up at a neighbor’s house and the neighbor was going to take her to the Humane Society knowing she would probably be euthanized because of her condition. Another neighbor got involved and took Harley to his place. Unfortunately, that person abandoned Harley also. One minute he told his neighbor about Harley and the fact that he had taken her in, and the next minute he was gone, leaving Harley outside without food, water, and shelter. The ‘last of the neighbors” fed Harley through the fence and when they realized that she had once again been abandoned, they took her in. Harley looked to be in pain and was so scared and sad. The family took her to a vet only to find out that she was heart worm positive and that she could have entropion of the eye. (Our friends will remember that we have helped 3 dogs this year with their entropion surgery).We committed to paying for the heart worm treatment and Harley was given eye drops.

Well, yesterday, I found out that we paid for Harley’s eye surgery for the entropion condition (please don’t ask) but her heart worm treatment was put on hold. AND, the first eye surgery may not have taken (which is not unusual with entropion). So now, sweet Harley, is still in need of heart worm treatment and after paying for Harley’s eye surgery, we don’t have the ability to cover that, and she may need another surgery on her eye. If you would like to help Harley start a new life, please make a donation and identify that it is for Harley. Donations can be made through paypal on this page or at P.O. Box 84, St. Clair Shores, MI 48080 Here is Harley today and when she was rescued. ~ diana 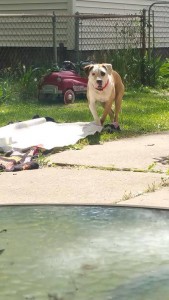 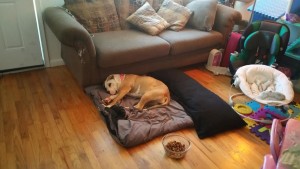