6//9/17 – Last week I received a call from one of the great veterinaries who work with us. A woman brought in a dog that her friend had found on the street. They attempted to find an owner but were unsuccessful. The dog, now known as Lil’ Ham, had nails 2-3 inches long which prevented him from walking flat on his paws. The rescuers had taken Lil’ Ham to the vet for a wellness check but two weeks later, he had 4 seizures without warning. Of course we agreed to help this very sweet emaciated boy. Lil’ Ham was again seen by the doctor and was given medication. He has not had a seizure since. Lil’ Ham (Hammy) will be monitored for 3 weeks and if he continues to be without seizures, he will be neutered and vaccinated. His rescuer, Katie, says that Hammy is sweet and affectionate and loves to snuggle. He is also cat safe. Anyone interested in Hammy should contact Katie at: katie.vangorder@gmail.com ~ diana 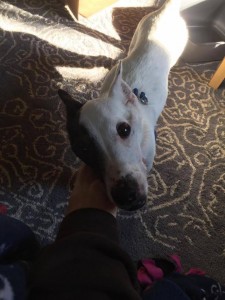