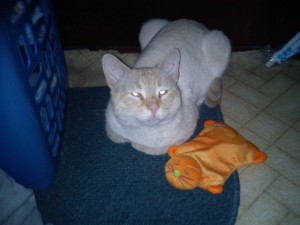 /17 -Around September 2012, our neighbor brought home a cat (Moe), who he said was around 6 months. He was a little cream colored thing, who loved being outside. Unfortunately, the neighbor thought that meant that he should leave him out at night, to roam. Several times, we saw him with scratches or dirt, from having fought the night before. Then, in January 2013, when temps were dropping, we noticed that the kitty had been thrown out of the house. Apparently, the jerk who’d brought him home moved out & the other people didn’t want him. We set up a shelter on our back porch & offered food, water & warmth. After a few days, as the temps dropped near zero, we knew we needed to figure out what to do with him. We already had 2 cats (13-year-old male & 10-year-old female) & really didn’t want to bring a new cat into the house. Didn’t want to upset the other cats & really couldn’t afford another. We asked everyone we knew if they wanted him, we called shelters & were told they didn’t have room. We were distraught & didn’t know what to do. I’d called our vet to see if they had any suggestions & spoke to someone who put me in touch w/ Gina from 4 Paws 1 Heart. We were able to bring him in for a check-up & 4P1H paid for his care. We were still trying to find him a home. But, while we searched, we moved him into a crate in our laundry room. After a few days, it was pretty clear…he was here to stay! There was a huge adjustment period for our other 2 cats & some shuffling of money, to be able to keep him. Then, he developed an eye problem (iritis) & we knew there was no way we could pay for the treatment. At that point, seeing how much he’d come to mean to us, my parents stepped in & offered to be his benefactors, so that we could get him the treatment. The following summer, the jerk who’d left him came back & asked to see him. I made him sign a form stating that he would never try to take him back. We had just over 4 years w/ our little Moey & enjoyed every minute of him. Sadly, he developed kidney problems this past March & we lost him. It happened so quickly. He may not have had a very long life & the first part wasn’t so great to him, but I hope that the years he had with us made him happy. If not for the help if 4 Paws 1 Heart & my parents, there’s no way we could’ve given him those 4 years. Thank you all so much! (The picture below is from when we first brought him in. My profile picture is from a few years ago.)