2/1/18 – I received the following message from our friends at Streethearts Animal Rescue. Please share and let people know that Dolly is still in need of a foster so that she can get going on her heart worm treatment which has been paid for by 4 Paws 1 Heart. She would do best as a single pet. Cassius is in a foster home and if all works well, he may be adopted by the foster. 4 Paws 1 Heart has also paid for Cassius’ heart worm treatment. Please keep these two beauties in your prayers. Here is their story. ~ diana
“An animal advocate/volunteer at Genesee County Animal Control witnessed Dolly & Cassius being brought into the building by someone. She overheard them stating they wanted to surrender the dogs because their owner had gone to prison. The shelter refused to take them & the person was very distraught & didn’t know what to do with the dogs so this individual offered to take the dogs from the individual & find help for them; so they turned them over to her. She called Streethearts and they took them in. We thought they were both about 10 months old but the vet estimated Dolly to be 2-3 years old after she was examined. They had evidence of being kept outside, they were filthy and coats were in poor condition.. Plus, a dog that is 10 months old usually does not often test positive for Heartworm. Dolly has evidence of being attacked by another dog & has scarring on her muzzle, plus, her jaw is slightly out of alignment. This may account for why she exhibits fearful/aggressive behavior toward other dogs. Anything you can do to assist would be much appreciated. – Streethearts Animal Rescue” 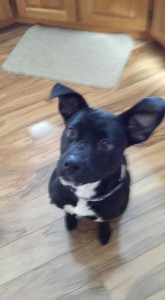 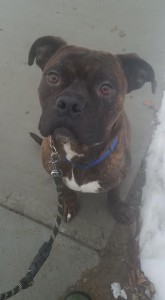