7/18/19 – This is Peggy. A very kind woman who does independent rescue contacted me about a stray pregnant cat who she had been trying to catch while still pregnant. Unfortunately, that didn’t happen and Peggy, just a little one herself, had her kittens but the rescuer couldn’t find them. After giving birth, Peggy became more trusting but the babies still could not be found. The following day when the rescuer went to feed her in an abandoned backyard, she heard crying from an abandoned garage. Lo and behold, there was Peggy with a right rear leg, broken and dangling. The rescuer immediately took Peggy into her home but continued to worry about the kittens because she still hadn’t found them. Peggy was taken to a veterinary where it was determined that her leg would need to be amputated. In the mean time, the search continued for the babies. These two little guys were finally found, having spent four days away from their mom and Mama Peggy had her leg amputated with the funds from 4 Paws 1 Heart. The story doesn’t end there because 4 Paws 1 Heart will also take care of her spay and vaccines as well as the medical needs for her babies when they are old enough. – Diana
4paws1heart.org/donations/ 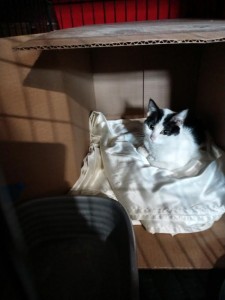 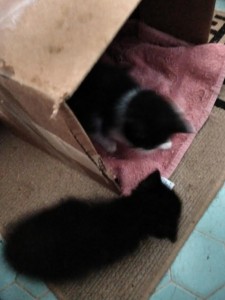