7/28/20 – Donations and Prayers Needed – Zeus is 6 weeks old. He, his three siblings, and a mom were all left in a box in the 90+ degree sun. The next day, the siblings and the mom were dead and the only when left was Zeus, covered in maggots and fleas. The rescuer took him to an emergency hospital but because the rescuer could only afford so much, he was released from the hospital. I was contacted this morning and he is now back in another emergency with our commitment to help him. Zeus is beyond emaciated, he will require IV’s and a transfusion, he also appears to have an upper respiratory infection. We have a 24-hour plan in place and pray that he can make it through the transfusion. I gave this decision a lot of thought but the little guy fought ever since he was put in the box of hell so we just had to give him a fighting chance. We could really use the help of our friends.Thank you for anything you can do. – diana
4paws1heart.org/donations/
4 Paws 1 Heart, P.O. Box84, St. Clair Shores, MI 48080 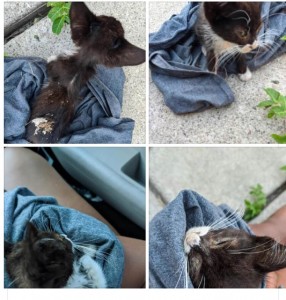 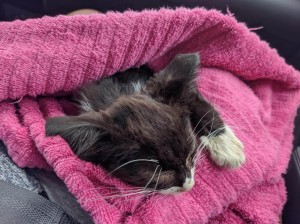 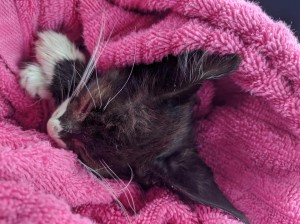