Skip to primary content
3/2/21 – The story of Puzzler. Awhile back, our rescue friend, Bonnie, trapped a female who was pregnant and had been responsible for a few litters prior. Unfortunately, she was unable to trap, at the time, a 3-4 month old kitten the female had in a different litter. Bonnie felt so bad that they had to be separated but then later she saw that a male cat she had been feeding, Puzzler, had taken the untrappable kitten under his paw. They became fast friends and Bonnie continued to care for them outside. Then one day she was able to trap April, the kitten, and we took care of her medical. Shortly after, Puzzler showed up with a very swollen face. This time she was able to trap him and we were able to get him quickly into a vet. He had two abscesses on his face, one was still and open wound which was healing. Another abscess was found on his face. His fur was shaved around the wounds for proper cleaning and he was given antibiotics. He will be vaccinated and neutered once recovered. The good news is that Puzzler was reunited with “his baby buddy”, April. They are both in a foster home together. Both are very sweet and they will be looking for their furever home. The last photo is Puzzler and April taken earlier when they were still both outside. We continue to be so very thankful for the rescuers, the fosters, our vets, and our donors. – diana
4paws1heart.org/donations/ 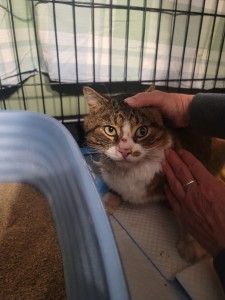 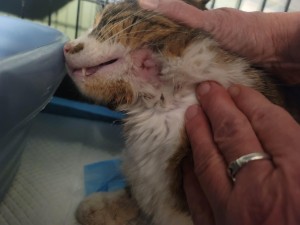