This is Dodger. On Ju 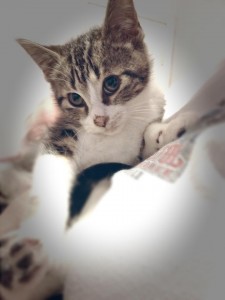 ne 17, 2012 he was thrown from a car on I-94. One of the staff at the Animal Urgent and Critical Care Center witnessed the incident and rescued him. Dodger lost several teeth, bit his tongue in half and his lip was torn away from his jaw. His jaw appeared to be broken but he is now healing well. Dodger was taken in by Venus and her husband, Jeff, who were very willing to pay for his injuries. 4P1H insisted on paying for the medical treatment and they are keeping this 13 week old baby until she can be adopted out. They are currently working on trust issues with him. Let us know if you are interested in adopting him at a later time. ~ diana