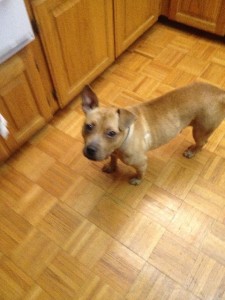 February 19, 2013 This dog showed up on the porch of one of our facebook friends. Her co-worker said that she would give her a home but after spaying and obedience training, the person felt the dog was too strong for her to control. The owners name is Pat. Her contact info is daisy2510@aol.com. She is currently being boarded at her Union Lake Vet in Waterford but the vet will only keep her another week as a favor to the owner. Josie is being medicated with Prozac and zanax and feels Josie should continue on these meds because they feel she has severe separation anxiety. She is 35 lbs and approx 1.5 yrs old and mixed with Staffordshire terrier. We’re putting out a call for help to all of our rescue friends. ~ diana

February 26, 2013 Update: Tonya Fransioli
“HI, want to thank you again for posting Josie. While she hasn’t found a forever home, she did get picked up by Pitbull Parents Rehab and Rehome, and I am happy for that. They posted some pics of her on fb and it appears she is doing great. Thanks again ~Tonya” 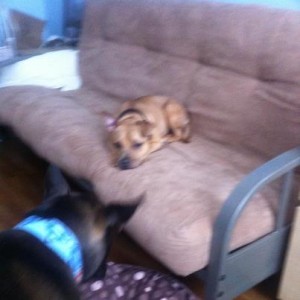 Check Out Josie’s new photo’s on the Pitbull Parents’ fb page. How nice to see her out of a kennel and on a couch. Here’s what her new foster family has to say: ~ diana

“Josie – Itty Bitty Pittie (5 photos)
Everyone – Meet Josie our Itty Bitty New Pittie. Josie is about 1-2 years old and loves people! She loves people so much, she doesn’t want to be left alone. Other than her little quirk to keep you close by, she is full of energy and loves to sit on your lap and give you kisses.”