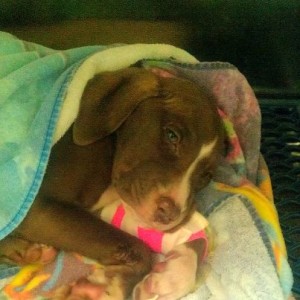 Kennedy is doing GREAT, but I am very sad to say that one by one all of the other 12week old puppies in this litter have died from Parvo. I just found out today that the last puppy died this morning. This makes me so upset because Parvo is preventable! Please have your pet VACCINATED so that people like us don’t have to keep watching innocent puppies die! We took Kennedy because she was the first one showing symptoms. She was sick 2 days before I was contacted. Another group took a puppy, but I’m unsure of the status. Last I heard the pup was receiving a blood transfusion. The rest died in this mans home because he had no money to treat them and he wasn’t willing to surrender them. He thought he could, “make money” off of selling puppies instead this is the 2nd litter, 13 puppies later, 8 suffered and died. This man is on disability and does not drive.  He has agreed to surrender the female.  4 Paws 1 Heart will pay for spaying and any other medical needs and the Detroit Bully Corps has offered to take her in.  Dog Aide 2012 has offered to transport her to DBC if needed.