A couple of days ago 4 Paws 1 Heart received the following message. We were happy to provide some medical dollars to help not only Miles but to show our appreciation for all that The Devoted Barn and Dog Aide-2012 do. Fortunately, with the help of a mutual friend, we were also able to get assistance for Miles from another source. Please continue to say your prayers for this boy and follow his story on The Devoted Barn facebook page. Also do some research on Mega Esophagus, you never know when it might be helpful. ~ diana 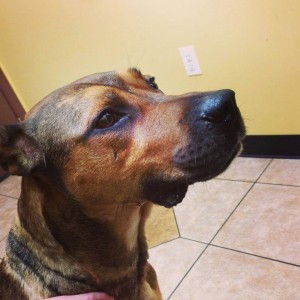 “Hi, my name is Megan and I volunteer at The Devoted Barn. I don’t usually ask for anything. I will usually try to figure out a way to raise funds in different ways for the rescues and causes I believe in. But, it’s come to a point in Miles’ treatment that it’s do or die. You see, he came to The Devoted Barn as a street dog with an infected, oozing embedded collar. He was wandering in St. Clair Shores when a concerned citizen spotted him and after hours was able to lure him into a back yard of an unoccupied home. She called every one… the local shelters, rescues, animal control, police department… They all either said “we have no room” or “all we can do is put him down”. The police department was honest enough to even tell her they would have to “use deadly force”. When I found out about him, I immediately thought of Mel B’s feral dog Shawn. They look so much alike! So I told her about him and she told me to go scoop him up!! When I got there… The plan quickly changed. There would be no “scooping”. I could smell the infection from 10 yards away and he was so aggressive with us that I had to figure out a way to contain him while driving and there was just no way in my small car. We made him a makeshift hobo house out of a wire crate, a lot of cardboard and some rope & tape for the night. He staked his claim over night which made it easy for us to trap him in it the next morning. Then put the whole thing in my Element! Perfect! Done! Then we got to the vet… He still wanted to eat us. even though I sang to him the entire way to Canton! Well, after tranquilizing him in the crate, we got him on the surgical table and removed his collar (snipped his manhood while at it). He woke up and after a while of the techs convincing him people are good, he finally believed it!! Now he LOVES PEOPLE!! So, then the real trouble began… He wasn’t holding food down. Not even water. He would eat or drink… Then cough and gag & bring everything up. I had my suspicions… and sure enough, mega esophagus. He’s been in the hospital for almost a month now (he did get to go home to the barn for a few days). He made so many human and doggy friends!! The horses were scary… But, I think he could even learn to like them! He now has pneumonia and has lost a considerable amount of weight. I went to see him today to get an idea of his status. He has obvious discomfort from chest congestion. But, he wants to eat and he really wants love and affection. He is not ready to give up, so there’s no way I am. This guy has stolen my heart. (I’ve worked in an animal hospital for close to ten years now. A dog tries to bite me, I take it as a challenge of friendship. I’m sure you know what I mean!!) The barn is OUT of funds… She paid up a few days ago… But he is not ready to come home. The technicians at the vet he is at have been paying for his subq fluids and one of the techs bought a bottle of PenG for him. But I think what he really needs to kick this pneumonia is a good couple days of IV fluids. Miles has been through so much. I can see it in his eyes. From that first day I met him, to today… When he fell asleep standing up with his head in my lap getting head scratches. He deserves to find out what sleeping in a bed is like. I’ve come up with some great tricks to battle his mega esophagus. But, we can’t know if they’ll really work and allow him to live a pretty normal life if we can’t get him past this pneumonia. If there is anything you can do to help, even to just raise awareness about The Devoted Barn and about Miles. Even to just raise awareness about MegaE!!!! We would all greatly appreciate it. We have a Bailey Chair being built for him and meanwhile the vet is doing their best to keep him upright during & after meals. I’m doing a ton of research and trying to figure out what could benefit him the most nutritionally and alternative therapies. Please let me know if there is any way you can help. We all appreciate the work you do and we know everyone is tight on funds. We would appreciate any type of help, especially raising awareness. Thank you for all you do. Megan”