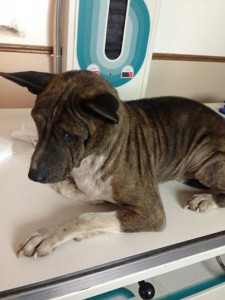 Meet SEVEN: About 2 weeks ago a Good Samaritan found this elderly dog stumbling down Nine mile and Gratiot. It was assumed that he was hit by a car because he was having trouble with his back legs. 4p1h was called. We offered to take him under our wing and give him shelter for the weekend until business hours opened up to see if someone would come forward to claim him. While in our care, we discovered he had stones in his bladder, a urinary tract infection, and trouble with his spine due to a calcification. He was treated and was comfortably recovering when his owner was discovered. The owner immediately came in overjoyed that his much loved dog had been found and cared for. We found out that his real name is Seven because he was born 7 days after the owner’s child was born. The child and Seven have been extremely close since. We are so very grateful that we are able to help cases like this through the Animal Urgent and Critical Care Center, thanks to Dr. David Balaj. You can imagine how this story could have gone the other way had the receptionist not called 4p1h for help that evening. She saved his life by doing so. ~ gina