Skip to primary content
1/18/15 – Another Happy Update: Lily was rescued from a horrendous situation and was found to have a bladder stone almost as large as her bladder. Between the funds raised by the rescuer and 4 Paws 1 Heart, Lily’s bladder stone was removed and she is doing very well. Here is an update from Lily’s new mom, Malak. ~ diana

I just wanted to give you an update on Lily. On Wednesday I took her to get groomed. I believe this was her first time ever getting groomed. She was very matted and her nails were extremely long! We had to wait until she healed from surgery before we could make her the appointment. I took her to Healthy Paws to get groomed.

As you can see from the pictures below she is doing great! When I picked her up from grooming she had the biggest smile on her face and was so excited! Lily is best friends with our first rescue, Lilo. We also found out that Lily is not a Yorkie-Poo. She is a “Westie” which is a White Terrier.

I just wanted to thank you and 4 Paws 1 Heart again for everything! – Malak” 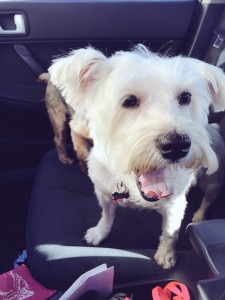