4/10/15 – So here is the situation — You saw the three kittens Gina took in last night. Thankfully, our friend, Amanda, of Advanced Animal Emergency, agreed to take them in and bottle feed them. This morning I received a call from another 4p1h friend — landscapers were at a home and found two 1-week old kittens while they were working on private property. The landscapers advised the homeowner, and the homeowner told the landscaper to THROW THEM IN THE TRASH. Can you believe this??? Unfortunately, yes I can. Although many puppies and dogs are abused, I firmly believe that more people believe cats and kittens are ‘throw aways”. I have to admit that I would love to see these people, who were so uncaring of life, rot in hell and maybe, some day, their actions will catch up to them. A huge thank you to the landscaping employees who did care and brought them into the hospital so that Amanda Morris could add them to the ‘group’. If I find out the name of the Company, I will let everyone know so that if you are looking for a landscaping company, you can check them out. Thank You, Amanda, for taking them in! Here is Amanda’s posting. ~ diana

“And just like that, three became five. Ttis the season. First three are all eating well this morning…. Let’s see what we can do about the next two. Soooo much tabby love! ~ Amanda” 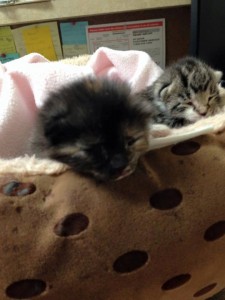