6/9/16 – UPDATE. I’m sorry it has taken me so long post, but yesterday Ali (aka Tootsie) went into respiratory arrest during the anesthetic procedure to change his bandage. I was assisting in the procedure when all of the sudden he stopped breathing, his heartbeat was weak, and he became extremely pale. Immediately I could not control the tears as they began to pour down my face. The doctor and I quickly worked on his tiny lifeless body the best we could and we were breathing into his nose and mouth for oxygen.
After a few minutes a MIRACLE happened. He let out a small little cry and began breathing on his own! Words can not describe the emotion that ran through my body. I am still in disbelief!!! I was concerned about brain damage, but he is acting no different than he did prior to the anesthesia.
There is a reason that he survived and that he is here with us today. In all of my years as a veterinary technician I have NEVER seen a puppy with his strength. As for the wound on his leg, it is slowly healing and from now on we are going to try to avoid anesthesia at all cost!!! We will try to apply the dressing and the bandage with him awake and hope that he keeps it on which has been a huge challenge. Thank you all for the support and the prayers! I will post another update on his progress soon. Gina 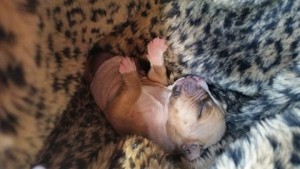 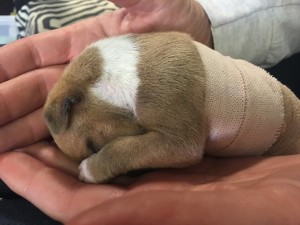