8/26/16 – RIP Sweet Kitty: We received a call for help from a kind family who came home from work and found a very sick kitty on their porch. They eventually learned that their neighbor had seen the kitten and planned to take him in but not before they treated him for fleas. They then proceeded to give this poor baby two flea baths; I’m sure not knowing how deadly over the counter flea medications can be to our animals, especially those who may not be healthy. The kind family tried helping the kitty by keeping him in a box on their porch but couldn’t bring him into their house because they had a senior cat. At our direction, the kitty was taken into Wilson’s Veterinary and the doctor determined that the kitty was more than likely in renal failure. He was suffering and the prognosis for recovery was grim. The doctor, the rescuer, and I all thought that the baby’s suffering should end so that he could peacefully cross the rainbow bridge. Please take a moment to say a little prayer for all of these poor abandoned animals walking the streets trying to fend for themselves in a world where not everyone values the love and importance of our four-legged friends. 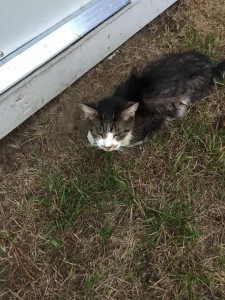