2/18/17 – RIP Sweet little Sherbert. Sherbert lived in a well-cared-for colony but always liked to snuggle in the straw. She also had a best kitty friend who always tried to protect her by laying on her. Consequently, the caretaker rarely was able to see Sherbert in full form. Last week the caretaker saw that Sherbert had lost a considerable amount of weight which was worrisome because she was only 5 pounds when she was originally trapped, neutered and returned with the help of 4p1h. Sherbert was taken into the home and we were contacted. Although she ate ravenously, she had severe diarrhea and was vomiting. Again, with the financial help of 4p1h, Sherbert was taken to a veterinary where it was found that poor baby Sherbert had FIP (seepetmd.com/search?Q=fip). To stop her suffering, the humane decision was made to let Sherbert cross the Rainbow Bridge. Run Free sweet Sherbert and thank you to her caretakers, Patricia and Bree, for giving her so much love and care. 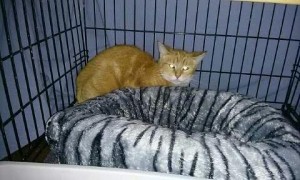