5/15/17 – Although we continue to help new animals each day, I wanted to share this happy update on this Monday morning. This was a horrific situation that we were contacted about and we did our best to assist with medical bills for the survivors. We are so thankful for our friends, Denise and Shelly, for taking in Phoenix and giving him the love and patience he needed. ~Diana

“Our dear Phoenix came to us over a year ago after the house he lived in Detroit was fire bombed. Out of 67 cats only 7 survived. If thats not horrific enough they were doused with firehoses and left in carriers for 2 days. Phoenix was in shock, suffered severe smoke inhalation and was beyond traumatized. We guess he was also pretty much feral. He stayed in a cat tower in our finished basement to decompress & heal his lungs. For 7 months he refused to leave the cat tower and basically just stared right through us for months, he was beyond traumatized. Slowly he allowed small petting by Aunt Shelly in the tower but still refused to come out. Aunt Shelly promised him he could do everything in his own time, he was safe and loved. We decided to make him a permanent member of our family about 4 months ago when we deemed him unadoptable. Slowly he started coming up to the kitchen and recently started taking chicken from our hands. He also recently started roaming the house after everyone was in bed with his best friend Bridgette always at his side. And then tonight when I went to turn off the lights in the cat room (yes, they have their own room) there he was..and he’s still there doing cat stuff…upstairs!!! We are to say the least overjoyed!!! He is finally, finally learning to trust and accept love 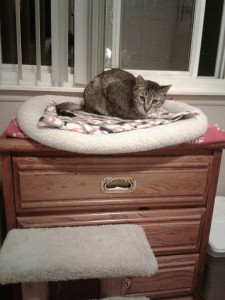 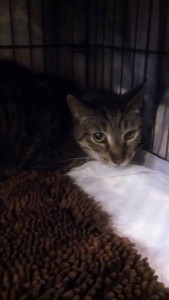