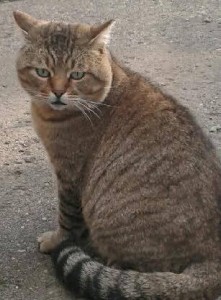 11/2/17 UPDATE: Unfortunately, the family who was going to take in Eddie if he tested again positive for feline leukemia has now backed out. There are two other sanctuaries that are being contacted to see if Eddie can be taken to one of them. The IFA results are not yet in and Eddie will be neutered tomorrow. ~ diana
11/1/17 UPDATE: After many hours of several people making contacts, the person who was to foster Eddie found a home with felv-positive cats who will take in Eddie if the IFA test comes back positive. If the results are negative, the original foster will take in Eddie and work at trying to find a forever home. – Diana

Additional Note: Many of our supporters saw a posting about a family of leukemia positive cats who were humanely euthanized at the recommendation of the doctor and agreement of the rescuer. Because of some venomous, uneducated attacks against 4 Paws 1 Heart, who is not the decision makers in any of the cases we assist with, I chose to take down the posting rather than have it negatively impact the hundreds of animals we continue to help. The fact that Eddie came into our purview a couple of days later is a coincidence and, as anyone who has followed 4 Paws 1 Heart for any length of time will tell you, Eddie is not the first nor the last fiv/felv cat that we have or will have medically covered. Decisions are made by the finders/rescuers and very often depends on whether a home can be provided. My background is in business — not veterinary medicine — and though others may think they know more than veterinarians, I will always take a veterinarian’s advice seriously.

11/1/17 Eddie Update: Eddie was left behind by his owner. A kind neighbor fed him and let him go in and out of her house. The neighbor contacted our friend, Dee, who is Chance’s mom and she contacted us to see if we could help with medical, and if we could, she would try and find Eddie a foster/permanent home. As you can see, Eddie is one handsome 15 lb. cat. In just a day, Dee found Eddie a foster and they decided that they would work together to find a permanent home. 4 Paws 1 Heart paid for Eddie to be tested and vaccinated and an appointment was made for him to be neutered this Friday, November 3. The veterinary staff immediately fell in love with this guy, who did nothing but purr — no matter what they did to him. And then the BAD NEWS came in — he tested positive for feline leukemia. Contacts were made and the sanctuaries are full. The person who was going to take Eddie could not take him because she has cats. So here we go again. The veterinarian suggested another snap test in about two to three weeks but there was no where for Eddie to go for this long and be kept in isolation. I suggested the IFA test which is currently being used to confirm/deny SNAP tests although is it more expensive. In the mean time, the original foster used her contacts and found someone who currently has feline leukemia cats and is willing to take Eddie in BUT Eddie can’t go there until the IFA tests come back which could be 3 – 10 days (because of the weekend and the days the lab tests). So, Eddie is now back with his rescuer and she has been asked to keep Eddie isolated and inside. Unfortunately, her husband has dementia and opens doors which allows Eddie to get out — but we are all doing what we can — understanding that everyone has cats. Bottom Line – We would love to find someone who could keep Eddie until the IFA test results are in. If they confirm that Eddie is positive for leukemia, he will go to the home with other leukemia positive cats. If he is not positive, he will be fostered by the original person who is a friend of 4 Paws 1 Heart, until a permanent home can be found. – Please continue your prayers for this very sweet boy. ~ diana