7/3/19 UPDATE: Cinnamon is having surgery on her tail today. She was seen yesterday. We’ll get an update later.

7/2/19 – Please say a little prayer for this very sweet dog. A very kind man was picking up his daughter at a bus stop and two people drove up and said they were being evicted and let the dog out of the car and drove off. The man took the dog home and contacted Animal Control who referred him to us for help. Cinnamon had a swollen paw and was chewing at her tail. The family, who couldn’t afford a vet visit, put a cone on her in hopes of keeping her away from her tail. The swelling in her paw got better but the tail was a concern. Unfortunately, one day she hid in the rescuer’s garage and it appears she chewed her tail off. She will be seen by our great doctors at Patterson and hopefully we can find out what happened. It is obvious that Cinnamon had been neglected by her previous owners. Here are before and after photos. ` diana
#Cinnamon 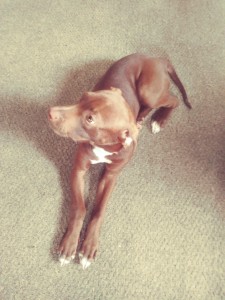 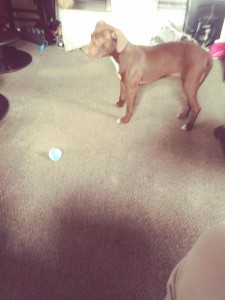