8/5/19 – Jax was one of three kittens found in early July. All three had upper respiratory infections but Jax had the worst. He was taken to the emergency where he was treated with strong dosages of antibiotics and spent the day there because he was also a little emaciated. Well, the other two kittens’ eyes improved but Jax’s eye steadily got worse. He was seen and treated a couple of more times but it was eventually determined that his eye would need to be removed. Today he will be at the vet for his pre-surgery exam and he is scheduled for eye removal this Thursday. Please say a prayer for this very sweet boy. This has been our Spring and Summer. So many innocent animals losing limbs and eyes do to infections and injuries, PLEASE, PLEASE, support us by donating today. 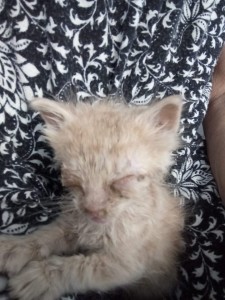 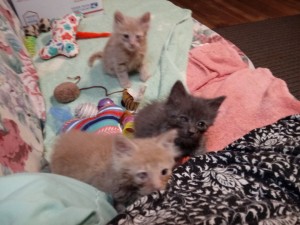 Update:  The doctor Jax saw on Thursday didn’t think the eye should be removed.  Jax was taken to another who agreed.  The rescuer will continue to watch over Jax and we will cover any medical needed. ~ diana