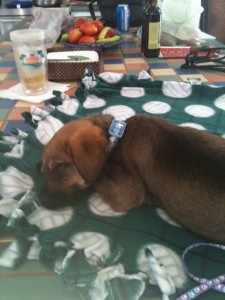 Meet Vincenzo — or as some like to call him — Vinnie. He was brought into the Animal Urgent and Critical Care Center last week because he had worms. The owners no longer wanted him although they had just rescued him during their recent  trip down South. The woman was so grossed out by the worms, she wanted no part of him — our lucky day. The owners surrendered him and 4 Paws 1 Heart paid for his medical treatment. As happens often when Gina takes in a little one, he made a visit to our house and here he is on his new blanket, (made by my niece, Alex) on our kitchen island. I think that I heard Luigi in the background saying “you always yell at me when I get up there — wtf!” Anyway, Vinnie, who we think is part German Shepherd and Coon Hound and about 8 weeks old is now in the great care of NBS Animal Rescue. Rebecca and Aaron stopped by last night on their way home and Vinnie got lots of hugs and kisses from the gang. Thanks again to the staff of AUCCC and our friends at NBS. ~ diana