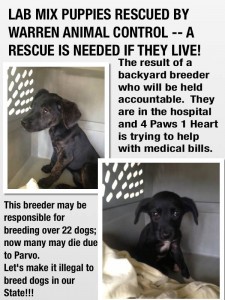 10/7/13 – I am heartbroken to report that the beautiful Lab-mix puppies who were rescued last week by Lisa, Warren ACO, died this past week end. They continued to be treated in the hospital and appeared to have been doing well. The doctor believes that another virus may have been responsible. At least they are no longer in pain and we know that we at least tried to give them a second chance. May Karma visit the woman who has continued to breed and sell these dogs and I hope their deaths are used to charge her with murder. ~ diana

10/1/13 – WARREN ANIMAL CONTROL OFFICER NEEDS YOUR HELP — RESCUE/FOSTER NEEDED: The Warren Animal Control Officers, rescued these two very sick puppies who were two of many lab-mix puppies who were backyard bred by a woman in Warren. They had been sold and then brought back and the woman couldn’t afford to take them to a vet. They had already been sick for a while and their littermates, who have also been sold, may be in the same position. The animal control officer had already had to retrieve dead bodies from the breeder.The breeder was forced to surrender the two returned, living dogs and we were contacted to see if we could help with medical dollars. They are currently at a veterinary receiving care and doing much better than we had hoped. Please share. These 10 week old puppies will need placement if they get through this horrible virus. Action has already been started against the owner. Updates will follow. ~ diana
Share
Donate Only with your Donations can we fulfill our mission to fund medical treatment for abandoned and abused Dogs and Cats. 4 Paw 1 Heart is a 501c3 non-profit organization. All donations are tax deductible in accordance with State and Federal tax laws. Our Federal Identification is #27-3247706.