1) Our little puppy who was thrown out of a car is now in a wonderful foster home with other little puppies and will be found a loving home through our friends at Home Fur-Ever Rescue. We received many e-mails on this guy, now named Boston, so if anyone is interested in adopting once he is available, please go to Home Fur-Ever’s facebook page.

2) We still need furever, loving homes for our little felines, Oreo and Spooky (formerly known as Sebastian). Both little guys are very lovable and would make a wonderful family members. Check out their stories on our page and if anyone is interested, please contact Gina or me. [email protected] or [email protected].

3) Our little Dewey still needs your prayers. He is not in the clear just yet. Gina is with him tonight and will let us know how he’s doing. 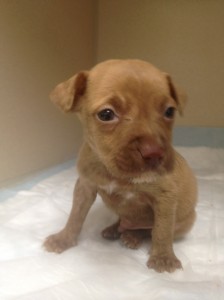 10/22/13:  Re: 4 week old puppy seen dropped out of a window last night, PURPOSELY! Amanda Morris, a huge animal lover and veterinary technician, was kind enough to bring him home and care for him while a foster/rescue is found.Please contact me at [email protected]

THIS IS THE BEGINNING – PART II: “THE GREATNESS OF A NATION AND ITS MORAL PROGRESS CAN BE JUDGED BY THE WAY ITS ANIMALS ARE TREATED” – MOHANDAS KARAMCHAND GANDHI 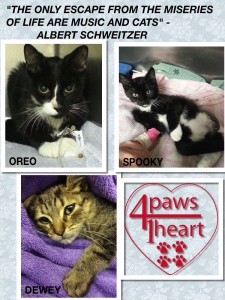 What do you think should be done with cats who are found on the streets? First let me explain in somewhat simple terms how cats are defined– understanding that nothing is black or white. An example to this is our Sophia who would have been defined as feral because she was on the streets for 10 months living with her mom and brother and fearful of people (taught well by her mother). Had we trapped her and took her to the shelter, she would have been euthanized as a feral. But we were ‘stupid’ (?) then and brought her into our home. Today she is loving, can’t wait for her belly rubs, and never misses the opportunity to be with us.

Cats found on the streets may be considered either feral or domesticated. A feral cat is one who was born and bred on the streets and is usually fearful of humans. A domesticated cat is usually one who did have a family and either was abandoned or became lost. A kitten born by a feral mother is not necessarily feral until it’s been taught by its mom. If the kitten is taken in early enough after weaning they can be very domesticated. And if a family is patient enough, even those who start off being feral may be domesticated – as did our Sophia and Nunzio.

Cats are the most euthanized in the shelters because of over population which is a result of: 1) too many owners who fail to spay and neuter and also believe that cats (even their domesticated cat) should be let outdoors; and 2) the lack of communities who recognize the need to fund and allow managed cat colonies. Today, the majority of communities rely on euthanizing outdoor cats to reduce the cat population — as if the cats were cockroaches instead of loving, beautiful creatures. Many studies have proven that killing does very little to reduce the population of outdoor cats and it is not only inhumane but a costly strategy. Only by spaying/neutering and vaccinating can the cat population be controlled and reduced.

10/18/13:  So Back to My Original Question – What should be done with outdoor cats who are found on the streets? Today, here is what is done in the many communities who do not allow cat colonies/free roaming animals. The cat is either brought into the shelter by a good samaritan (the person thinks they’re doing the right thing because they really just don’t know any better) or by an animal control officer. If the cat appears to be feral, it will be euthanized — in reality, what else is there to do with a truly feral animal? Either allow him to live in nature, find a family who might be able to domesticate him (nearly impossible when even the domesticated cats have problems being adopted), or kill him. If the cat appears to be domesticated, she may be held according to the stay laws of a community (just in case there is an owner) and then, more than likely, killed. Some people may think these actions are better than allowing an animal to roam the streets where they can be tortured, preyed upon, hit by cars, etc. But what do you think?

The solution, once again, is in your hands. If you truly want to make this a better place for you, your children, and your grandchildren, take these issues to heart and let’s become a well-informed and involved society. Thank You ~ diana