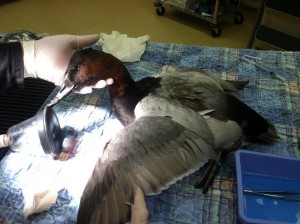 1/9/14: Yes, I know 4 Paws 1 Heart is all about domestic animals but sometimes you just have to do what you have to do. Meet Donald, the Duck. Rescued by St. Clair Shore Law Enforcement and the skilled staff of the Animal Urgent and Critical Care Center. Here’s Gina’s report:

“Meet Donald the Duck.. He was brought into the Animal Urgent and Critical Care Center by law enforcement early yesterday morning after being found injured and bleeding on the side of the road. Officers thought there was no hope for Donald and wanted to make sure he was humanely euthanized. Donald had trauma to an area under his beak that required about 10 stitches. Dr. Matt Capitanio jumped right in to help this little guy and “4 Paws 1 Heart” paid for the medical care. Donald was placed under anesthesia and I assisted Dr. Matt in the repair.
Dr. Matt generally treats cat’s and dog’s but he didn’t hesitate to try, and his efforts have paid off because Mr. Donald is doing wonderful!

Lisa one of the emergency technicians was kind enough to get Donald eating throughout the night with a combination of chopped up lettuce floating in water. As of an hour ago, Dr. Matt Capitanio headed back up to the clinic on his own time and he is transporting Donald the duck to a licensed wildlife veterinarian where he will continue to recover and then be released to the wild where he belongs. Huge thanks to all who were involved in making this happen especially the doctor for giving Donald a fighting chance!!!