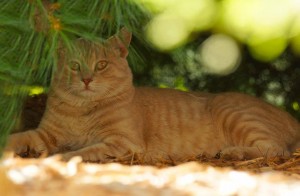 1/30/14 – Meet Mr. Honeybell. We received a call from an individual who had been feeding Mr. Honeybell since last summer. The caller was worried about him because of the weather and Mr. Honeybell seemed to be taking a liking to the family. Unfortunately, the caller had not been able to catch Mr. Honeybell and it became obvious that the cat had injured his leg and was no longer eating. With the help of Paws For The Cause Feral Cat Rescue, Mr. Honeybell was captured and taken to Cats Vet where the new 4 Paws 1 Heart/Cats Vet Fund paid for treatment and tests. Mr. Honeybell was released to his new dad and 4 Paws 1 Heart has committed to ensuring Mr. Honeybell fully recovers. He is scheduled to have his leg re-examined next week and we hope it will not require amputation; if so, we may be asking our supporters for help. We appreciate that Dave and Candy, the initial caretakers, have taken this guy into their home. Mr. Honeybell is still getting used to being an indoor cat but I’m happy to report there is one less injured cat is on the streets. ~ diana

Mark your calendars and prepare for some very fun events to get you out of the winter doldrums. Please share and get as many people out as possible. We can’t continue to save abandoned and abused animals without your support. ~ diana 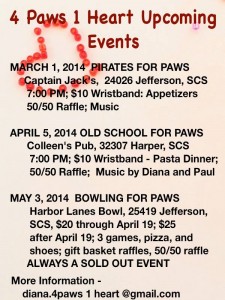