12/20/16 – A HUGE thank you to all of our old and new friends who stepped up to our Secret Santa Challenge and exceeded the Match. The over 4,000 animals we have helped since 2010, thank you for their second chance at life. You might remember that on December 26, 2013, a beautiful feline boy Gina named Soup was found on a lawn with his head stuck in a soup can. The caring homeowner brought him to the emergency, where fortunately, Gina was on duty. His tail had punctures, he had a broken pelvis, a dislocated femur, and horrendous bruising. It appeared that he was attacked while he couldn’t defend himself. Of course, 4 Paws 1 Heart took this baby into our arms and he was taken to an orthopedic specialist and we found a wonderful, loving person to take him in so his pelvis and femur could recover. That wonderful person happened to be our friend who later became the mom of Chance, Carlos, Phoenix, Rosie Roo, Bridgette, and many fosters — Denise. After Soup recovered from his injuries, Gina took him into her home and finally, a little over 1 year later, Soup’s final, loving family was found. In celebration of exceeding the Secret Santa Challenge, I bring you an update from Soup’s loving mom, Mary Beth. ~ diana

“In 2012, we had to let my beloved cat Drake cross the rainbow bridge, as he had cancer. I was so distraught over losing Drake, and I wanted another cat to keep our cat Whiskers company, but I wanted to wait a bit of time. About a month went by, I was seeing different cats on Facebook rescue sites. One day, a cat named Soup caught my eye. Not so much the way he looked, but his story.
A year earlier, he was found outside with his head stuck in a soup can. He was taken to a veterinarian where they discovered that he also had a crushed pelvis. Something had gotten him when his head was stuck in the can. He had surgery and was on cage rest for three months, and remained at his foster mom’s house for another nine months because she loved him so much.Then she decided he should find a home so she could make room for more fosters.
I made arrangements to meet Soup, as well as another cat, that had only three legs. When the foster Mom brought Soup into the room to meet my daughter and I, he immediately plopped on the floor and wanted us to pet him, he did that the whole time during the meet and greet. We thought it was hilarious and it was love at first site.
The foster Mom wanted to bring him for a home visit, and my whole family wanted to meet him, including my son in law. There were seven of us, and everyone fell in love with him. Needless to say we adopted Soup, his foster Mom says that she couldn’t have chosen a better home for Soup. It brings tears to my eyes just writing this because we love him so much. He is such a good cat, he has so many nicknames, I akways say he is super duper, the superest guy ever, and so on.
I always tell him he is famous, because I still see flyers for his rescue organization , 4paws1heart, with his picture on it displayed in pet stores and such. ~ Mary Beth” 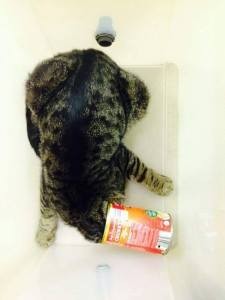 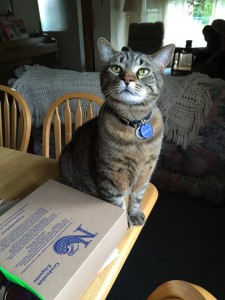