4/4/17 – RIP Sweet Tanner – A man working at a construction site saw this beautiful cat trying to walk on only 3 legs; he could not use one of his back legs. The cat also looked to be in pretty rough shape. The man brought him to his mom and they proceeded to clean him up and call rescues for help. Unfortunately, after four days they were unsuccessful and contacted us. Yesterday, with the help of Rachel G. and our friends at The Kitty Clinic, Clinton Twp., MI we were able to get Tanner in to see a doctor. Not surprisingly, it was bad news. Tanner’s leg was broken above the knee, his tail was also broken. And, although that could have been addressed, x-rays also showed Tanner to have an enlarged, full bladder which couldn’t expel urine. He also had liver disease which may have begun at birth (he was estimated to be 6 months old) The doctor found that his medical issues were just too severe and recommended Tanner be put out of his pain and allowed to cross the Rainbow Bridge. We don’t know what happened to poor Tanner but we are thankful that he did know love in his final days. He is now running free, playing with catnip mouses and chasing taser lights. ~ diana 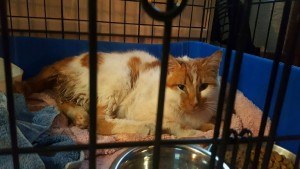