3/12/18 – 4 Paws 1 Heart originally helped Duke with having the majority of his teeth removed due to a severe gum infection. Last week we were contacted by Duke’s rescuer advising the following:
“Duke isn’t doing so good!

🙁 duke has an autoimmune disease and his body is rejecting his teeth.. again.. 2 years ago he had most (all but 2) of his teeth removed… his mouth was severely infected & he became anemic very quickly… he’s was fighting quite a battle… his odds weren‘t good… but it was not a question that we had to fight for dukes life! Well the last two teeth got to go as infection is setting in and his kidney isn’t doing so great. I’m so grateful for the help of 4paws1heart in dukes care, as well as Kimberly Joy. Without them & many others who donated duke wouldn’t be here! Duke is so alive; he’s only 4.. he has such the will to live, I can’t throw in the towel now… if you would like to donate toward his medical care you can donate directly to 4paws1heart ( will post link below) Thanks again to everyone who has supported duke, it is more than APPRECIATED! Erica”

FOLLOW UP: Duke’s new doctor suggests that Duke does not have ‘fatty liver disease’ as originally diagnosed but does have a liver issue. We are working with our vet to ensure that Duke is comfortable and pain free and will be treated as needed to maintain Duke’s quality of life. ~ diana 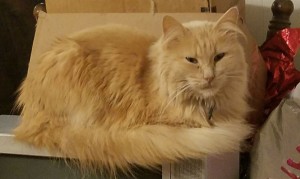