3/12/18 – Max has had a horrible life; how horrible we can only guess. His spirit, his mind, and his body have been horribly damaged but a kind woman rescued him and hopes that with the help of 4 paws 1 heart, we can make him whole again. Here is his story as told by Amy. ~ diana
“I found Max on a busy street; he was covered in blood and he was so weak, he just fell in my arms. He walked sideways. He was so dehydrated, I had to bottle feed him water for 2 weeks. Max could notmove he laid on my bed on top of puppy pads. I took him to the vet; his immune system was so weak. Max had mange and a serious infection in his jaw that was caused by a bite mark. He had a bunch of different bite marks on his face and his nose. He was very very skinny and you could see every bone in his body. He had a very serious head tilt since he had a serious serious ear infection from ‘them’ cutting a piece of his ear off; they also cut a diamond shape out of his tongue. He was electrocuted and appeared extremely tortured; until this day I’m still finding Issues from the torture. He cannot be kenneled because he freaks out so bad to where he makes himself bleed. He has extreme separation anxiety, fear, and aggressive to men (who he really doesn’t like). Amy”
Max also has ‘lumps’ on his elbows. 4 Paws 1 Heart has taken on Max’s medical and so far he has been treated for a severe ear infection. He’s had a few seizures which may be attributed to that. Max will now be seeing our favorite and most trusted doctors at Patterson Veterinary. Please pray for him an all of the other animals who are so tortured and abused.
Your donations enable us to make a difference in this world.4paws1heart.org; P.O. Box 84, St. Clair Shores, MI 48080. 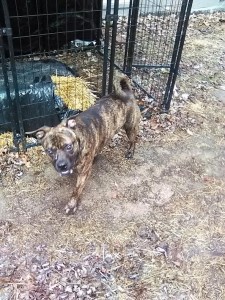