5/13/18 – Happy Mother’s Day from Ruby! Ruby was found wandering the streets. She was covered with scabs, one half of her ear was missing, and she was scrawny and malnourished. Ruby had a collar on that was so tight it was imbedded in her neck. Her feet were flat from spending her puppy life in a cage. It took several months for Ruby to no longer be afraid and to get healthy but here she is when she was first rescued and now with an update from our partners at Friends ofScooby. Working together is the only way we can make a difference. ~ Diana
“One more update for everyone! Rubyyyyy!
I paid for her shots and mange treatment.
Diana & 4 Paws 1 Heart paid for her spay.
A few months later she was adopted by an amazing family up north! I get an update on her every 6-8 weeks. She has made some amazing changes from the dog i first met. ~ Megan” 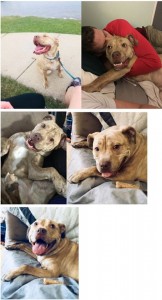 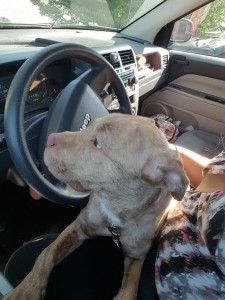 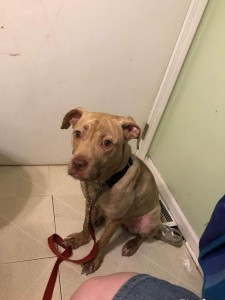 5/14/18 – Prayers for Kuz as he gets ready to start his heart worm treatment. We are thankful to our many rescue friends, veterinarians, and supporters who make a difference in the lives of the abandoned and abused. ~ diana

“A little over a month ago we found out this guy had a slew of health problems and heartworms to top it all off. Diana and 4 Paws 1 Heart are his saving grace. They are sponsoring the heartworm treatment. He had bloodwork and started doxycycline to begin treatment. He was started on milk thistle and cranberry for his liver and kidneys. And he was sent up north to be cared for.
Today he had the staging done and more bloodwork. His bloodwork looked good (greatly improved) and he will start the shots on Monday.
Thank you Linda for being his caregiver and making sure he gets to his appointments.
Thank you Diana & 4 Paws 1 Heart 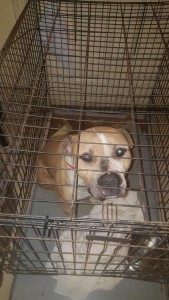 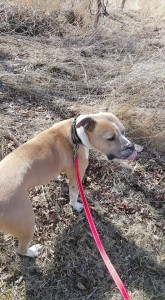 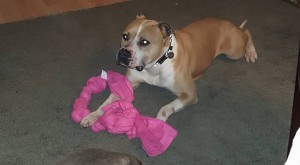 5/12/18 – 99.9% of all dollars donated to 4 Paws 1 Heart go directly to the medical care of abandoned and stray animals. Gina’s phone is the only expense paid by 4p1h, all other operating expenses are paid by my husband and I. Our Board also generously donates items for raffles and volunteers their expertise and time. Through May 14, we have a generous donor who will match all donations to a maximum of $1,500. That may seem like a lot of money (and it is) but when you consider that one animal’s visit can cost $500, that kind of money can be easily eaten up.

At this time, I would like to remember a very sweet kitten who was eventually named Mac. Mac was only 8 weeks old and he had already had 3 siblings die. The rescuer thought he was out of the woods but then a few days ago, Mac became very lethargic and wasn’t eating or drinking. When Mac wasn’t improving, the rescuer took him to a local vet where he began to have a seizure. We were then contacted for assistance. I immediately contacted the vet and spoke with the doctor and put Mac under our name. The prognosis was not good but I felt we had to at least give Mac a chance. So, after just a few hours in the hospital, being given fluids, and having his blood tested, and x-rays, Mac’s prognosis continued to be very poor. His blood results were off the charts and the doctor, whom we’ve known for a long time, believed that Mac’s chance of stabilizing, let alone having a good quality of life, was very poor. So, only a few hours and a $550 later, our poor little Mac was allowed to cross the Rainbow Bridge. I don’t mention the dollar amount in an attempt to try an monetize the life of an animal but just to show our supporters of the magnitude of medical treatment. And, sometimes, no matter what is spent, it doesn’t save the animal. Prayers for sweet Mac and the rescuer. Though, on a positive note, we learned of other animals with the rescuer who need our help and we will be doing that.

Again, thank you for your support. ~ diana

5/11/18 – Bunny was heart worm positive, full of parasites, and acted as if she never had one-on-one love. I took her in to foster her for several weeks and 4 paws 1 heart offered to cover her medical care. She has started the beginning treatment for heart worm and she is now with 313 K9 and Kitty Rescue. She is looking for a more permanent foster situation or a home while she undergoes her treatment. Please consider making a donation towards her care.
Bunny was found on the street, had a stay in boarding, then transferred to my house, and then transported to her foster family and then on to the next temporary foster situation, and now she is looking for another foster or permanent home. This poor dog has been bounced around so much in such a short period of time, I would love to hear of someone being interested in giving her a forever home! She is an amazing dog! I have fostered many dogs and there are only a few that I have considered keeping. She is one of them. Please contact the rescue group if you are interested in finding out more information or in meeting her. They sent me a photo of her with an adult cat, so apparently she gets along with felines. ~ Gina 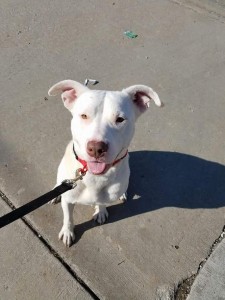 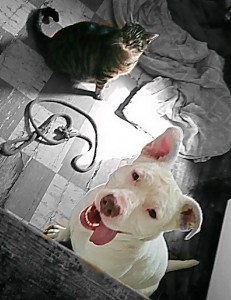 5/10/18 – Don’t forget–your donations will be doubled this week!
This is Anna Belle. We received a call for help and because of our supporters we were able to respond.
She was seen in the middle of major roads and after 3 days of trying, she was finally safe, in the ‘arms’ of the rescuer. She was brought to a veterinary clinic where they advised she was heart worm positive. Unfortunately, no owner was found and although the rescuer was anxious to give her a forever family, they could not afford the heart worm treatment. We were happy to make that happen. Here is the rescuer’s most recent message:

“Isn’t she a beautiful Girl , So sweet and good .
I want to Thank you and your company for all you do .
My family’s heart go out to u.
She reminds me of my pure breed German Shepherd. Anna Bell has the same eyes and sweet demeanor
Thanks again Diana . God bless you .
David H. Gagin” 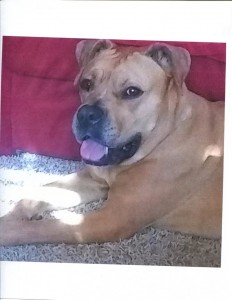 5/9/18 – So thankful we could make a difference in another life. 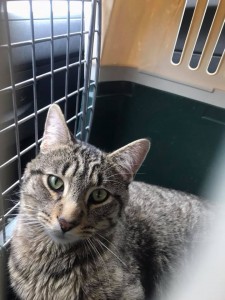 5/9/18 – Update: Hank will be transferred to Fortunate Felines rescue , Kay will be caring for him from this point on until he is adopted, once we arrange transportation. Unfortunately the possible home that we had did not work out. So fingers crossed he finds a home very soon after being neutered.

Hank went to the vet today. He did well and combo tested negative. Yay! Turns out his tail has been bitten by another animal in three different spots. He was given antibiotics and will be neutered and vaccinated on May 23rd! I have a rescue stepping up for him but also have a possible adopter. So I have my fingers crossed for the forever home of course.

Huge thank you to Diana Rascano and all of her loyal contributors , 4paws1heart backed all of this baby’s medical and I am so grateful that my coworker Mary was able to spot him and notice he was injured.
He’s on the road to a better life! ~ Cortney”

5/9/18 – My heart breaks when I see these defenseless animals born in the wild. This female had her babies just ‘moments’ after she was rescued. I can’t express the gratitude I have for our wonderful village of animal saviors. ~ diana 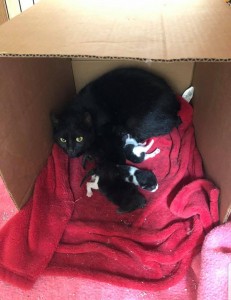 5/9/18 – I received a call from a kind man who had already taken in 3 cats and 3 dogs and was currently feeding a colony at his home. He told me that a very sweet cat (Betty) had showed up with a severe wound on her face. The next day the man was able to get a ride and get her to one of our partner veterinarians. Well, Betty turned out to be Bobby and he had already been neutered. He was very sweet but the wound on his cheek was so severe, several stitches were required. Bobby was kept over night to be observed. The next morning I got a call from the man advising that he couldn’t pick Bobby up from the hospital in that he was in treatment for cancer AND that he couldn’t take in Bobby. There was no way I wanted Bobby back out on the street in that I was sure he had been someone’s pet so I put a call out to our village of friends. My prayers were answered and Bobby was picked up from the vet and is now in a foster home. Another life saved!! AND, don’t forget that your donations can be doubled this week. We couldn’t do this without you. ~ diana 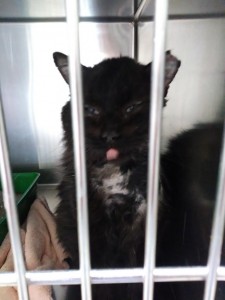 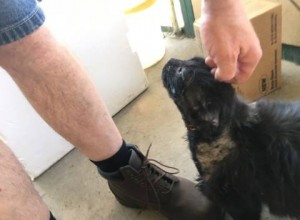 5/8/18 – There are many victims of addiction — rarely do people think of the animals left behind. Yesterday morning an emergency call was made to our friend in regards to four, days-old kittens found in a home where the resident was evicted. The home was in horrendous condition and these babies were lying on this filthy blanket; the babies still had their umbilical cords attached. The kittens were immediately brought into a home where they could be bottle fed and the rescuer returned to the home to try and trap the mom. Upon returning to the home, the rescuer learned that there were actually 4 ‘adult’ cats who may have escaped; one of whom was the mom. Thankfully, in the afternoon, the mom was trapped and reunited with her babies. The family is now with a temporary foster and 4 Paws 1 Heart will be medically backing everyone. Three traps were left at the property in hopes of catching the other 3.
UPDATE: This morning, another cat was trapped. More photos will follow but in the meantime, here are the babies. ~ diana 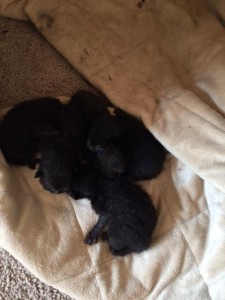 5/14/18 – DOUBLE YOUR DONATION! Starting today, a generous supporter will match donations made through May 14, 2018 — up to a maximum of $1,500. Our supporter has named this campaign “Annie Banana’s Scholarship for Needy Puppies and Kitties”. Donations can be made through paypal by using the donation link on the left side of this page or by check at P.O. Box 84, St. Clair Shores, MI 48080. Thank you for making miracles happen ~ diana 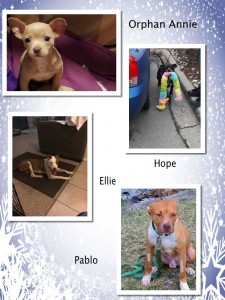