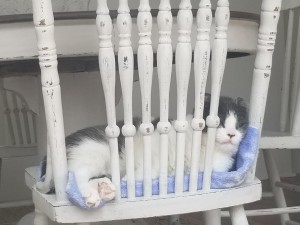 !
Frankie: He had emergency surgery to amputate his tail after it became infected from frostbite. The poor little guy has since been to the vet several times to ensure he was healing property and to have his bandage changed. He’s been real stubborn about keeping his cone on and although, sweet, I think he’s getting frustrated with his many vets. Hopefully, his last one will be this weekend.