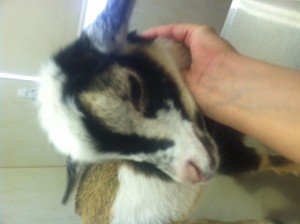 This pygmy goat was confiscated and signed over to an Animal Control Officer after a report was received that a local Pet Store was holding a Pygmy goat who, according to the caller,  had a urinary blockage for two days. The goat was listless and appeared to be close to death.  He was taken to the Krause Veterinary Clinic in Armada who treats goats and they confirmed that the goat had a urinary blockage and would require an operation or humane euthanasia.  The goat was only two months old and it just didn’t seem right to kill him after what he had gone through.  4 Paws 1 Heart agreed to take care of the operation with hopes that the City attorney will be able to get restitution as part of the animal cruelty judgement.  We hope that we can help with the demise of a pet store which has been on everyone’s radar for a long time. ~ diana