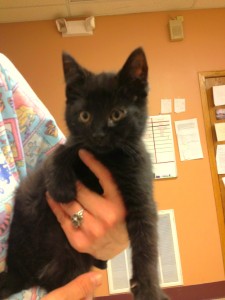 CAN SOMEONE TAKE IN THIS LITTLE SWEETHEART?? So we have a new kitten named Elliot. He was dumped in the Target parking lot tonight beside the vehicle of a woman who lives in Harper Woods. When she arrived at her car, she saw a kitten who had been placed in a carrier with no one around. She brought the kitten into the Emergency and I offered to sign him over to 4 Paws 1Heart. We checked him out and he has a little cold. He is otherwise fine and tested negative for feluk/fiv. If there are any rescues available this kitten is a LOVER!! ~ Gina 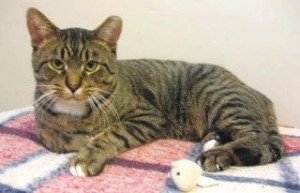 A 4 Paws 1 Heart friend, Robyn, came to us needing some medical assistance for a beautiful cat she had rescued from outdoors. This poor little guy had to visit the doctor a few times but now he is healthy and ready for his forever home. Robyn contacted us with the good news. Here’s her note. ~ diana

“Great news! Jack got adopted! I found a wonderful family on Craig’s list. He will be living with an older retired couple and their 21 year old granddaughter. He will also have a cat companion to play with! I sure hope it works out. I fostered him for a few months, and before that he lived his life outdoors. He will never have to find shelter or food again! Thank you so much Diana, and thank you Gina for helping him at the vet!!”
Robyn 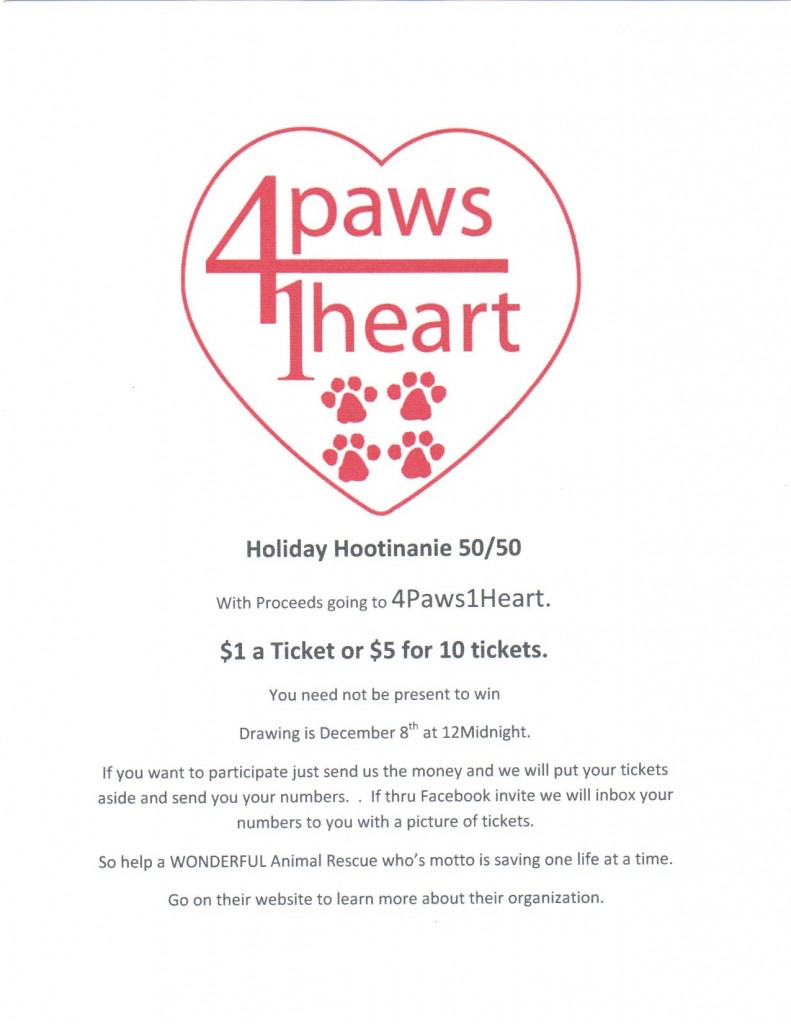 Our friend, Joe’l Tebbe-Francois, has selected 4 Paws 1 Heart to be the recipient of the 50/50 raffle she has annually at her Christmas party. I’ve attached their Raffle flyer in case any of our friends are interested in buying some raffle tickets. Thank You so much, Joe’l. ~ diana

11-6/7-12 Stella & Spike were rescued 24 hours apart from each other. Both of these pups came to Heroes for Homeless Animals in rough shape. Spike was found as a stray at a local business on Nov. 6th. This poor guy was freezing cold, emaciated, coughing, and had bite wounds all over his body. Poor Spike had been used as a chew toy and he is only 4 months old. He has an upper respiratory infection along with a skin infection. Spike also has a (possibly) broken tail which is causing him a lot of pain. He is now on antibiotics and pain meds to help him recover. Spike is super sweet and submissive! He loves to give hugs and love on his people. He will be available in a couple weeks.

Stella was rescued about 24 hours later. She was found as a stray. She was spotted as she was searching for food. Stella is approx 6-7 months old and a dark brindle (possible) whippet mix. She is only 20 lbs and beause of her age will probably not reach 40 lbs. Stella is healthy overall other than the large pussing wound she has around her neck. Our vet feels as if Stella was strangled with a small rope or wire. She is doing amazingly well. Stella loves people, but is curoius and a bit nervious when meeting new dogs. She will be available in a couple weeks.