A MESSAGE FROM OUR BIG BOY — HERCULES ~ diana 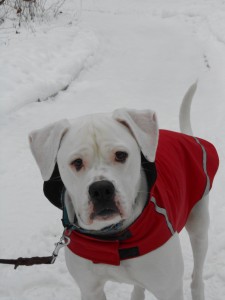 Hello from Hercules!
I have discovered lots of very cool things about Michigan in the winter. Snow is fun! It is wet and cold and disappears when I chew it. I can hide in it – that’s why I have my own jacket! I can run and play in it! I get to go for long walks in the woods when it snows and track new scents and paw prints. It is especially nice when I can go to Partridge Creek and visit friends with the colorful lights on while it is snowing. I miss the snow!
See you soon!
Hercules (& Dr. K) 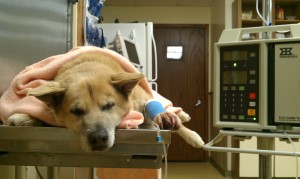 TO HELP A DOG HIT BY A CAR…..EXCEPT ONE WOMAN. Tonight this female stray was hit by a car and was laying in the road until a caring woman stopped to help. She spent an hour trying to wave down traffic but not one person stopped to help her get the dog in the car. While she watched this dog, she called the ER vet twice, We told her to bring the dog in and 4 Paws 1 Heart was able to offer the dog help because of, “our mission”.  The woman said, ” the dog kept trying to walk but immediately fell down over and over”. The dogs paw was hurting and injured. Finally, someone stopped to help. The dog was then rushed to emergency. Our assistant carried her 60-pound, limp body to the treatment area.  She was critical and on the brink of DEATH. We treated her for hypothermia and SHOCK.  It took three hours for her vitals to stabilize. If treatment had been delayed much longer, she wouldn’t be alive.  This poor girl was drenched in water from rain and puddles of melted snow with a temperature almost 10 degrees below normal. She has at least 7 fractured ribs and an injury to her front paw. We have her on I V Fluids and medications.  I will post an update this evening. ~ Gina 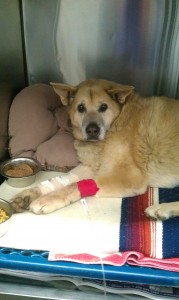 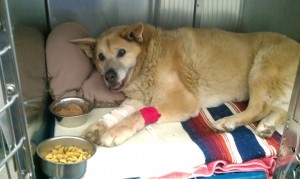 1/16/13  The pain for Annie has just been unbearable…  Day 3 of hospitalization..  The doctor has had to up her pain medication twice since she was brought in.  Finally, she is resting more comfortably on a constant IV drip with several additives.  Her broken ribs, injured paw, and broken canine tooth, on top of her being up there in age, has made it quite challenging for her to endure.   There is something about this girl that is so special.  Maybe it’s because she fought so hard to stay alive and she was on the brink of death when she came in.  I truly feel like she belongs to someone who is missing her terribly.  I just hope I’m right, but for now we are doing everything medically that we can.  Tonight she was eating a mixture of yummy canned food out of my hand, but she hasn’t been interested otherwise.  I’ve cooked some ground beef and diced up some chicken to bring to her for breakfast.  Hopefully, she will have a better appetite tomorrow. ~ gina