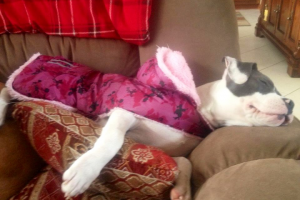 Please share. This is our April who was rescued and then found to have Parvo. She made it through that and now needs her forever home. Look at this sweetheart!!! Please contact our good friends at A Rejoyceful Animal Rescue if you’ve just fallen in love. ~ diana
April…. In a nutshell! Lol this girl takes napping to a whole new level!! April is looking for her fur-ever family! We cannot believe that no one has claimed this kid yet?! Please share to help her find her people! If you’re interested in April, please email [email protected]
Share 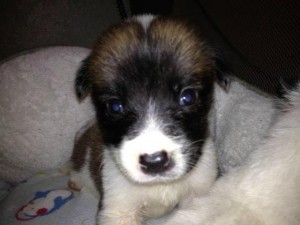 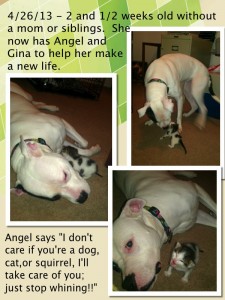 4/27/13 Here are the photos that I promised of our Angel and our little Nino (or Nina) who at 2 and 1/2 weeks old was found by a good Samaritan without a mom or siblings. He has a respiratory infection like so many of the kittens found on the streets but we know he is in good hands and paws. Angel couldn’t wait to take care of another baby. ~ diana 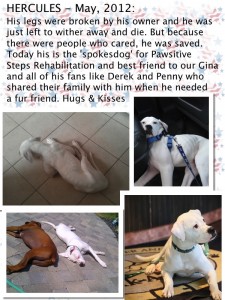 4/21/13 I have to say that I didn’t grow up with any pets. And, over the last 34 years I’ve only had cats. But, family members have dogs and I love them dearly. Then Hercules came into our lives and I can’t tell you what a joy that was. Hercules was so broken when he first came to us from Matt Virgadamo who was the ACO in Eastpointe at the time. Gina took him in to foster and was there for the trial against Herc’s owner. Unfortunately the pos only got a year probation but Hercules got a chance at a new life. We’ve learned a lot since then. Gina took him everywhere to socialize him amongst good human beings. I’ll never forget the day last year when we took him to the Paul Mitchell beauty school. On our way home he just collapsed in the back seat after a very tiring day of belly rubs. Hercules is a special being who stills gets so excited when he hears Gina’s voice. I thought that I would throw a few photos of him together. Here he is shortly after he was brought to us; then the photo of him falling asleep in the car; a photo of him at Derek and Penny’s with their little one; and finally a photo taken of him by my friend, Joe Fabian. And, as always, we are very thankful for Lori Jobak of 4Paws Health & Wellness who worked with our Herc for 9 months providing hydro-therapy and getting helping Herc to once again be able to walk and to Dr. Tari Kern and her husband, Chris, who miraculously came to us and adopted this very special boy. ~ diana 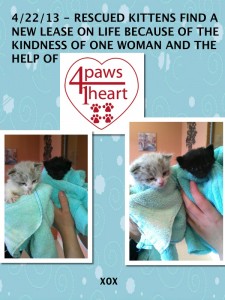 4/22/13 These are the two kittens that I’ve been advising a lady on how to raise them… She is doing a great job so far! The lady rescued the kittens from outside and called for help with medical care because one of the kittens had an infected eye. We provided treatment along with the other basics needed to give them both a good start. ~ gina 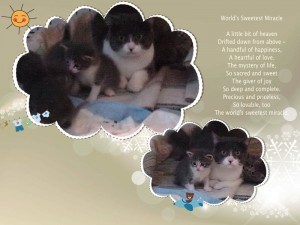 ATTENTION: Dear friends and fellow animal advocates. I just want to once again clarify the mission of 4 Paws 1 Heart. We fund medical treatment for abandoned, stray, and abused companion animals. We are not a Rescue and do not have any of the resources required to be a rescue. We are a 501c3, federally recognized non-profit. There are times when we find ourselves in the position where we must care for an animal but it is always based on Gina’s abilities. But, even when Gina finds herself in the position of caring for an animal, when it is time for a forever home, we will always look for a rescue group to take in the animal for the next step of the journey. We rely totally on donations and fundraisers because we never charge fees to cover our costs. Our costs are our mission and is why we seek donations. I just wanted to clarify our position although it is on our page and website so that our friends will not get disappointed when we can’t provide help in placing animals. Thank You for your understanding and help. ~ diana

4/25/13 Gina’s girls are very smartly wearing their “Make Macomb Your Home” scarves. Don’t forget that if you got one of the scarves at one of our events, please post your little one wearing it. Thanks ~ diana 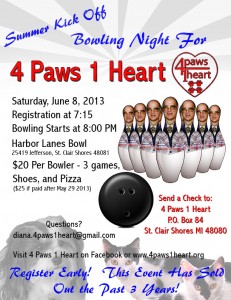 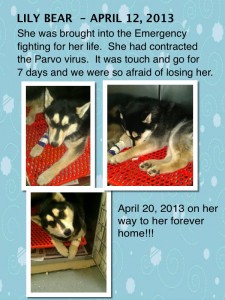 A nice family found Lily Bear roaming the streets and brought her into the Emergency.  Lily Bear was dying from the Parvo virus.  It was touch and go for 7 days and many times we thought that we would lose her but she kept fighting.  After the 7th day, Lily Bear turned the corner.  She is now with a forever family with a fur sibling, skin siblings and a mom and dad who will love her. ~ diana