July 10, 2013 : 4 Paws 1 Heart received a call for help for a dog now named Summer. Her story was beyond heartbreaking and, of course, we sent some dollars to Summer’s vet to kick off the fundraising drive. It appears that enough money has now been raised to take care of the amputation Summer needs. Here is the story we initially received from Mary Paetz: ~ diana 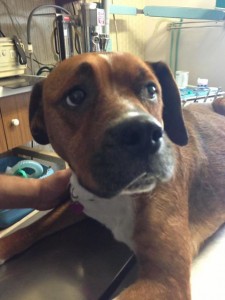 “I swear I do not seek this stuff out. It finds me and how can I say no?? So I just got a call from the vet asking me if I can help them with a dog that was brought in by her owners (and I use that term very, very loosely) this afternoon to be euthanized. The vet says she is too nice of a girl to be euthanized so they got the owners to sign her over and would like to try to save her IF donations can be raised and a rescue group secured. Her back leg needs to be amputated once the infection is under control. This dog’s name is Summer. She started chewing off her paw back in January and she has now chewed off the whole entire foot on her back left leg! I have seen the picture. It will make your stomach turn and your heart break all the same time…..”